Helping Obama Feel Your Pain at the Pump... 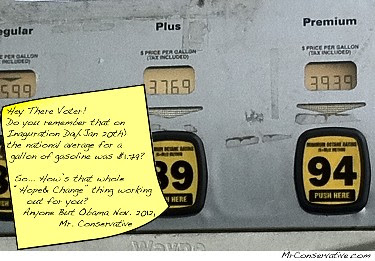 A reminder of where high gas prices came from...

...By Taking Your Pain to the Polls

Here is a really great idea from Mr. Conservative [click to read]. Frustrated by the rising price of gas, he felt compelled to leave a note on the pump to remind the uninformed where the rising prices were coming from.

If the store can sell you a doughnut or a drink with pump advertising, why not use the space and time to educate. Here is one from The Republican Study Committee [click to read] that I'd like to print as a sticker and leave every time I buy a tank. ht/Redstate

Here's something to think about: Obama's Oil Flimflam [click to read] by Charles Krauthammer details the President's real record. Though he likes to go to a college campus and make speeches about domestic production, his record on the matter speaks for itself:

"President Obama incessantly claims energy open-mindedness, insisting that his policy is "all of the above." Except, of course, for drilling:

*off the Mid-Atlantic coast (as Virginia, for example, wants);

*off the Florida Gulf Coast (instead, the Castro brothers will drill near there);

*in the broader Gulf of Mexico (where drilling in 2012 is expected to drop 30 percent below pre-moratorium forecasts);

*in the Arctic National Wildlife Refuge (more than half the size of England, the drilling footprint being the size of Dulles International Airport);

*on federal lands in the Rockies (where leases are down 70 percent since Obama took office).

But the event that drove home the extent of Obama's antipathy to nearby, abundant, available oil was his veto of the Keystone pipeline, after the most extensive environmental vetting of any pipeline in U.S. history. It gave the game away because the case for Keystone is so obvious and overwhelming. Vetoing it gratuitously prolongs our dependence on outside powers, kills thousands of shovel-ready jobs, forfeits a major strategic resource to China, damages relations with our closest ally, and sends billions of oil dollars to Hugo Chavez, Vladimir Putin and already obscenely wealthy sheiks." -- Charles Krauthammer

But you say: "aren't we running out of oil anyway?" Read The Peak Oil Myth [click to read] by Bob Lutz in Forbes before jumping to conlusions. 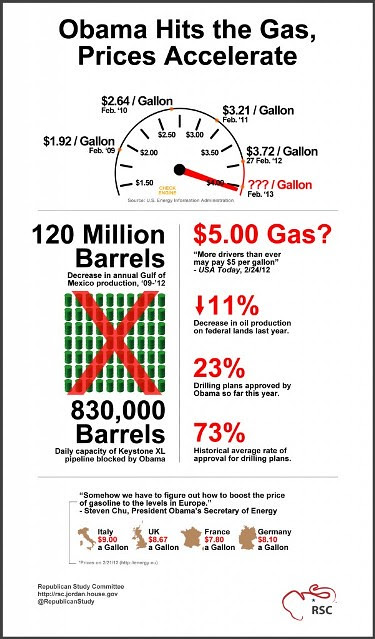