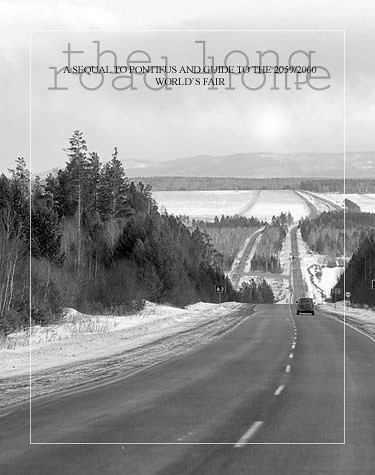 The Long Road Home
The Sequel to PONTIFUS and
A Guide to the 2059/2060 World's Fair
By Bob Kirchman
Copyright © 2016, The Kirchman Studio, all rights reserved

Fred shuddered as his captor lifted the goat carcass to bleed it. “Tonight’s supper!” the man laughed roughly. He handed his axe to his companion who rounded the corner. Then Fred saw the van speed off and he was quite sure his life had been spared for only a little bit of time. “You will make good worker.” The captor said; “Then you go way of goat!”

Enslaved! How unlike the world of “freedoms” he had grown up in. Good men had labored for centuries to end the vile institution of human enslavement, but the new ‘enforcers’ of Worldstate’s remote highways had no respect for the hard-fought battle for human dignity and freedom. Fred thought of the history class where he had slept through a lecture on the Barbary Pirates. These brigands had taken men off of American ships and pressed them into their service. Thomas Jefferson had sent in the Marines.

But now, Worldstate was stepping forward to fill the void left by the disappearance of millions of people. Their rule was pretty universal and they had conscripted the vilest of terrorists as their enforcers. There would be no Marines, Fred thought to himself.

And so began the days of his unwilling service. Fred’s strong physique made him a useful worker and he found that his mind was quite engaged in ways he could not have forseen. Now, left without his Bible and the little guide that had sparked his interest in matters Eternal, he found that those things pushed their way into his mind as he labored. He was surprised at how he was not in such despair as he thought he would be. Though he lived with the constant threat of death, it was losing its fearsomeness. Though he indeed was treated roughly, he was finding some sure reservoir of strength to draw from. He didn’t understand it, but he didn’t need to.

Something was drawing Fred’s attention to beauty… even in the midst of this bleakness. Things such as clouds in the sky and the golden light of evening, when his labors ceased, the young man counted as treasure as he embraced them as simple gifts from above. Indeed, he was conversing with the Divine. That did not override some of his anguish and confusion, but like the reassurance markers that told you the Bering Strait Bridge was in a certain direction, they pointed to some point of resolution.

Would it be in this life, or in a life to come? Fred did not know. Had he known the old hymns he would have known the sweet juxtaposition of hope in Heaven dwelling comfortably alongside hope for joys in this present life as well. The old saints could have shown him that a savoring of nature’s majesty was quite naturally a prelude to the great story of Redemption. That was the movement in the symphony that preceded the great crescendo of Eternity! One did not need the life he lived to be perfection in order to feel this joy. In fact, it seemed to take root most vigorously in a variety of circumstances.

Perfection was not necessary for it to grow. Joe, who had disappeared at Taba, was far from perfect in his living it out. The dedication he had for his friends had its roots in something that now called Fred to want it as well. But those family members he identified with that type of living were now gone. “Who would be able to show me this ‘more perfect way?’ Fred wondered, for there was indeed a noticeable vacuum in the world in the wake of the disappearances