The Gift of Mobility

Off the Shelf Assistive Technology

Don Schoendorfer never forgot her. While on a trip to Morocco some thirty years ago, he watched a disabled woman literally drag herself across a road with one arm. We take wheelchairs for granted but in much of the world they are simply not within reach for many who need them.

Schoendorfer's genius is that he used readily available parts, already mass-produced in large quantities, to assemble a strong and simple wheelchair that could be distributed by the container load to needy areas.

Picture a plastic garden chair like they sell at Wal-Mart atop a frame supported by bicycle tires [available at Toys-R-Us] and you get the picture. It's OK to laugh, but for most recipients, the laughter shall be unrestrained expression of their joy!

Schoendorfer's Free Wheelchair Mission distributes the chairs as kits in container loads of 550 but the waiting list is long for the simple chair. Each one represents a life changed forever.
Posted by Bob K. at 6:25 AM No comments:
Labels: Don Schoendorfer, Milestone Monday

We're Better at it Than We Think We Are!

We all know about the great Chicago fire and its alleged bovine beginnings. But how many of us are familiar with the fact that in 1904, that's 104 years ago, the business center of Baltimore was totally destroyed by the Great Baltimore Fire.

So here we are a couple of years past the havoc wreaked on New Orleans by Katrina. This aticle in City Journal: The Big Easy Rebuilds, Bottom Up caught my attention. Father Nguyen The Vien's story is worth hearing. This Vietnamese clergyman worked to bring his community together and used their church building as a base to support individual efforts of his congregants to rebuild their houses. This article by Nicole Gelinas is a good study of how government can help [or hinder] such efforts and how sometimes the best thing to know is when to get out of people's way. I suspect we learned a lot of this 104 years ago.
Posted by Bob K. at 9:11 AM No comments:
Labels: Katrina, New Orleans, Nguyen The Ven

Modern Israel is a Light to the Nations

Twenty-eight years ago I remember my amazement that the florist boxes from our wedding were from Israel. A little research showed that this small nation used some creative irrigation technology to become a world agricultural power. What's even more amazing is that many of the people who came there from Europe were not even farmers! The Israel you DONT see on the nightly news is truely making the desert blossom like a rose.

This Tourism Department Website is really worth looking at. It certainly gives you a taste for the beauty of this land and its special character.
Posted by Bob K. at 3:44 PM No comments:
Labels: Israel

Mom Taught Us How to See the World

During the great World War my mother went to work at the Martin Company in Baltimore. She worked in the engineering department and helped develop the airplanes that fought in the Pacific. Her background in mathematics and physics gave her a unique perspective, to say the least. She proudly stated of her tenure at Martin: "I REFUSED to make coffee for them!" Yes, this was the late forties and early fifties you have to remember.

How cool is it to have a mother who pointed out beautiful airplanes! She grew up in the shadow of the Blue Ridge Mountains so she pointed out many other wonders as well. Her drawing skills were amazing. So was her ability to convey lessons about the way the world works in everyday tasks. Her kitchen was a laboratory and once she continued to divide the last piece of pie to show us kids how you could divide something in half for infinity. There were five of us kids and Mom could cut a pie into seven equal pieces flawlessly. Her good eye was often not appreciated when we did home improvement projects. If something was crooked, Mom saw it!

Mom could show you "all the colors of grass." Something I always mention when I do workshops with students. She knew the subtle signs that the seasons were changing. I am eternally grateful for her teaching me how to see!

We took her ashes and Dad's to the beloved mountains overlooking her girlhood home and it is always a sacred time for me to step into that little spring valley that is green all the year and remember.
Posted by Bob K. at 5:21 AM No comments:
Labels: Milestone Monday, Mother's Day

It's a Beautiful Movie 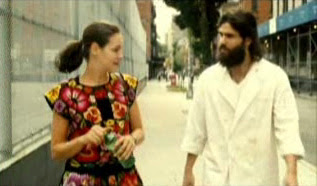 I finally saw the movie 'Bella.' It just came out on dvd and I highly recommend it. It is a beautiful story with a redemptive message.
Posted by Bob K. at 7:57 AM No comments:
Labels: Bella, Eduardo Verastegui, Tammy Blanchard

Observations on a Subway Ride 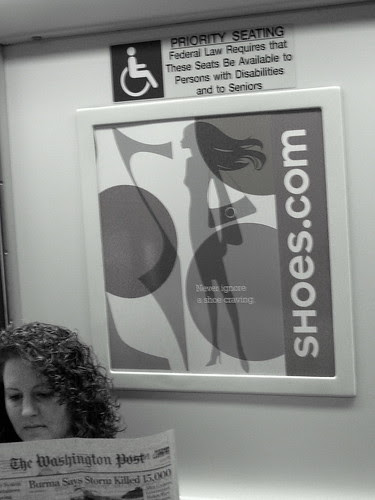 The Washington Metro offers a window into the culture of the city. All subways do. I still recall a trip into St. Louis where the ads for the casinos where all over the train. Soon I noticed the public service ads for the gambling addiction hotline. This week I had to go downtown so I noticed these two signs. The first states: "never ignore a shoe craving." Advertising is always great at 'creating a need.' I thought of Nehemia and the proverb about the undisciplined man being like a city without walls. On the return trip I saw the publc service ad for free HIV medication. How sad that our public messages seem to shout at life from the edges. 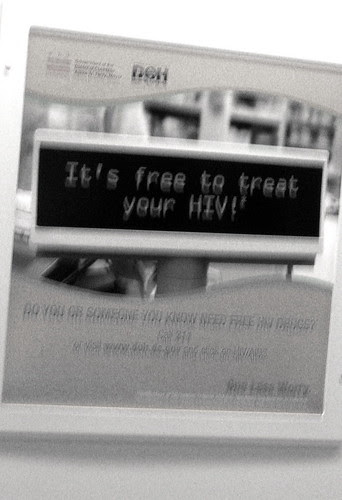 How sad it is that we're brilliant when we gratify our desires, heroic when we care for the victims of plague, but 'intolerant' when we suggest that there may be old wisdom that would actually guide our lives. Something to think about.
Posted by Bob K. at 7:39 AM No comments:
Labels: Ethics, Nehemiah

His Message is Timeless

The story of Nehemiah begins with his hearing a report about the distress of his beloved Jerusalem. The walls are broken down and the city is at the mercy of attack from enemies. Nehemiah, who is the Persian king's cupbearer, is troubled by the news and finds himself driven to prayer.

Of course, the trouble of Jerusalem begins years earlier when they ignored their divine mission and sought to be more like the nations that surrounded them. Proverbs 25: 28 says: "Like a city whose walls are broken down is a man who lacks self-control." Then, as now, there was a drive to throw off traditional wisdom and the results were disasterous. The walls of Jerusalem fell long befor the Babylonians destroyed them.

Senator Jim DeMint and David Woodward speak of the more modern attempt in their book: Why We Whisper: Restoring our Right to Say it's Wrong. Outlining the expense society incurrs running away from traditional values, the authors lament: "As elected officials and judges continue to throw traditions overboard from the ship of state," conspicuously absent from the political debate "is the mounting cost in dollars [and] debt." Consider the costs society bears as a result of the 'sexual revolution' alone. Treating STDs alone is bankrupting our health care system and safety net programs. When you add the costs of bearing the burden of out-of-wedlock child bearing and trying to replace the support once found in traditional ramily structure, there is much to lament. It's been said that "You are not G-d's messenger if the message doesn't break your heart." Its time to honestly lament the distress of our people in this day.
Posted by Bob K. at 11:18 AM No comments:
Labels: Nehemiah
Newer Posts Older Posts Home
Subscribe to: Posts (Atom)