Gothic Towers in Two Seasons, A Sampler of Churches 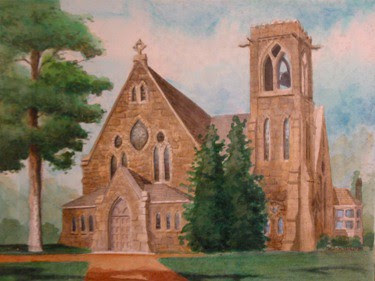 This is my painting of University Chapel. When Jefferson created his academic village it did not have a place of worship. In the late Nineteenth Century members of the Charlottesville community raised the money to build this gothic revival chapel designed by Charles Emmet Cassell of Baltimore. The cornerstone was set in 1885, and the completed chapel was dedicated in 1889. The chapel marks a sharp departure from Jefferson's classical forms.

For thirty years now, our studio has produced architectural art. [1.] I started the studio in faith and with some apprehension. My daughter was one year old and I would often finish up a 'rush job' in time to visit Mom and daughter for the 2:00am feeding! Those are sweet memories. When I went out on my own, my boss took me out to lunch and essentially told me I was a fool to do this. I would never make a go of it!

But for three decades the little studio struggled on. Sometimes we did some incredible things! [2.] We raised some great children and they often sat drawing at a little table beside mine. We had our good times and our bad, but looking back there is no way I would have changed my mind. We are who we are as a family because of the way we chose to live. Watching my daughter with her daughter, I have no doubts.

So, while it might have seemed to an observer that I was painting houses, churches and gas stations, I was really creating a celebration of family. That is why I have chosen the two works here... the University Chapel where our family began, and a recent commission (below) that also celebrates the beginning of a family! 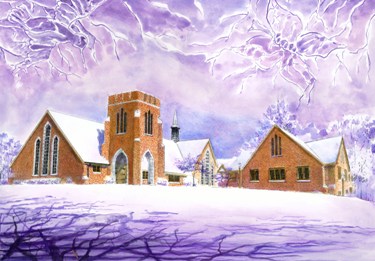 Our industry has changed. No longer does every project require a hand-created presentation. Much of our work has been replaced by digital representation. Still there is much to be said for the power of traditional media and I continue to provide this service to a small group of very creative designers who value it. I have also ventured into some fine art projects and look forward to finding new avenues for creative expression and ways to use that creative expression to further the work of a Greater Kingdom:

But in keeping with his promise we are looking forward to a new Heaven and a new Earth, where righteousness dwells."
-- 2 Peter 3:13

See, I will create new Heavens and a new Earth. The former things will not be remembered, nor will they come to mind."
-- Isaiah 65:17
Posted by Bob K. at 1:00 AM
Labels: The Kirchman Studio