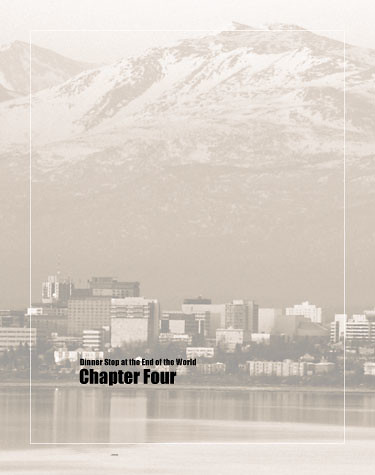 What we obtain too cheaply, we esteem too lightly; it is dearness only that gives everything its value. Heaven knows how to put a price upon its goods, and it would be strange indeed if so celestial an article as freedom should not be highly rated." -- Thomas Payne

Like the Transcontinental Railroad of old, the Bering Strait Bridge was forged out of the ashes of a time of great Chaos. Alaska was now an autonomous republic, much like Texas in the Nineteenth Century. When United States President Barry Soetoro brokered an unprecedented third term, he then attempted to defund the bulk of the American military. Here he made a fatal miscalculation. The man who had no stomach for extended conflict, who often went to bed when he should have gone to the situation room, forgot that the men and women in his command had no such misgivings. All it took was a handful of generals who quietly slipped to Alaska with the codes for the missiles and Soetoro was their hostage.

Taking a lesson from America's bloody Civil War, the generals were quick to offer terms of peace tailor-made for Soreto's constitution. Alaska would become an autonomous state and provide basic security along with the United States Armed Forces. The rift that had long existed in the so-called 'United States' was now official. Soetoro's 'Blue Party' had promised citizens scores of benefits, all to be provided by the government. When the bill came in, there was no longer a thriving economy to pay for it. Gradually Soetoro's regime had to limit what they could give away. An economy in shambles looked to men and women who seemed to come from another era. Those men and women would carve a new nation out of a wilderness.

A brief time of conflict did ensue. Soetoro loyalists commandeered some landing craft. Coming ashore at night, they sacked and burned Juneau before moving on on to attack Anchorage, hoping to isolate and destroy the pipeline terminal at Valdez. General Palin created the ruse of a man unable to direct his troops, drawing the Soetoro forces ashore with the appearance of poor defenses, he hammered them from the hills surrounding Anchorage. Although Anchorage burned, the economic lifeline of Valdez remained unscathed.

The loyalists blew up every bridge and communication tower they could. They soon came to the realization that in destroying Juneau, they had failed to destroy the Alaskan government. Under the red crosses on tents outside Fairbanks, deep inside Alaska, the business of the young republic went on. Cell towers might have been taken out but ragged children ran to and fro with important communications. The President of the young republic shared a tent with war wounded and took a turn at tending for their needs. Citizen-soldiers bolstered the ranks of American troops who had followed the renegade Generals. They were ragged and often had to provide their own supplies and ammunition. In the end they proved to be a "well organized militia."

The defense of the important port of Valdez was their shining moment. As Juneau and Anchorage smoldered in ruins, Soetoro loyalists tried to circumvent the naval vessels protecting the oil terminal. In their overconfidence they tried to move inland to destroy Alaska's economic lifeline. They were met by the ragged men who had been all too easy to rout earlier... now in the mountains where the same ragged men prevailed. German general Rommel had traveled to Virginia to study Thomas Jackson's Valley Campaign before he became known as the 'Desert Fox.' Alaska's General Palin was, if anything, a more thorough student of Jackson. Alaska might have provided a more limited infrastructure for troop movement than Nineteenth Century Virginia, but her mountains held way more secret passages.

In the American Civil War, Thomas Jackson had enjoyed exellent communications using signal posts such as Massanutten Mountain in the great Valley of Virginia to relay his important messages. Alaska presented a vast array of “signal knobs” for a military engineer with the abilities of Martin O’Malley, Palin's chief strategist. Yupik Inuit specialists joined the effort, communicating in their native language at times. Soetoro's forces couldn't crack the code. Palin always was aware of their positions. By the time they realized it was a Native American language, the war was over. The defenders of the Alaska Republic dug in for a long fight, remembering the lessons of the Civil War, but the Soetoro forces had no great generals and Soetoro himself had little taste for war, especially war that could not be quickly won. His unmanned drones were innefective in the North, where men who honed their marksmanship hunting polar bear were quick to pick them off. After the tide turned at Anchorage, peace was negotiated.

At the battle of Anchorage Rupert Zimmerman, who was no soldier but a strong defender of his land and family, was wounded. This requiring the amputation of his right leg. Recuperating in exile in Nome, he began sketching his great bridge. A new republic, resource rich but lacking connection to the rest of the world, was waiting for him. General Palin's chief engineer, Martin O'Malley, was also in Nome. The dashing young Captain took a liking to Zimmerman's daughter Elizabeth. Elizabeth had left her native Virginia to be at her father's side. Elizabeth was a gifted artist and a visionary in her own right. An interesting charrette ensued as Zimmerman's great bridge came to life before their eyes.

Zimmerman found in Martin a man of the stature of Claudius Crozet, Napoleon's engineer who came to Virginia in discrace after planning the Battle of Waterloo. Crozet had built railroads and canals. He built the Blue Ridge Tunnel through the mountains with an army of 2000 Irishmen. O'Malley, the descendent of railroad builders, joked that he'd require three times as many Frenchmen to accomplish his task. Martin and Rupert set to work to create drawings and raise capital. With solid commitments in place, the men made a trip to Wales to survey the stage upon which they would begin their magnum opus.

Although they almost lost their lives when their tent burned on the tundra above Wales, Rupert and Martin survived to begin their great work. Returning to Wales sick and disoriented, the men recovered rapidly as they began assembling resources to build the Bering Strait Bridge. The genius of Zimmerman and O’Malley was in convincing their backers that they really didn’t have any genius. What they were building was nothing that hadn’t been done before. They referenced the Chesapeake Bay Bridge-tunnel built in the nineteen-sixties in Virginia. That span was 26 miles long and connecting Alaska to Siberia simply required two spans of similar length joined end to end at the Diomede Islands. What they left out of their narrative was the relative difficulty of what they were proposing. The Chesapeake Bay Bridge-tunnel was essentially built on pilings driven into the sandy floor of the Chesapeake Bay. The Bering Strait was infinitely more complex, a wild undersea topography that was complicated by plate tectonics.

Seven men had died building the Chesapeake Bay Bridge-tunnel. Assembling a bridge exposed to the whims of severe weather had its risks. Zimmerman came up with the idea of a tethered pontoon bridge prefabricated in sections in the relative safety of shipyards. Seagoing tugs would maneuver the pieces of Rupert’s game into place and robotic submersables would place the cable stays to keep it in place. Another problem of the Bay Bridge-tunnel was exposure to the elements of travelers on the bridge. A truck had once crashed into the Bay after apparently being struck by lightning! Wind sometimes wreaked havoc on large trailers. Bering Strait Bridge traffic would move in covered roadways. Assembly in shipyards created an economy that allowed for such upgrades.

The only elements of Zimmerman’s plan that had to be fabricated on-site were the high suspended portions to allow for the passage of large ships. O’Malley designed two -- one in each long span, feeling that would be more than adequate. At the last minute the Russians threw a wrench in the process, demanding another high crossing on their side of the Date Line in the span between the Diomedes. O’Malley worked out a design change but stretched the construction budget over the limit in doing so. Zimmerman was furious. His investors were becoming uneasy. In the end he gave the Russians the shortest suspension span possible.

Copyright © 2015, The Kirchman Studio, all rights reserved
Posted by Bob K. at 12:30 AM
Labels: citizen journalism, Citizen Journalists, Dinner Stop at the End of the World, Pontifus, Thyme Magazine