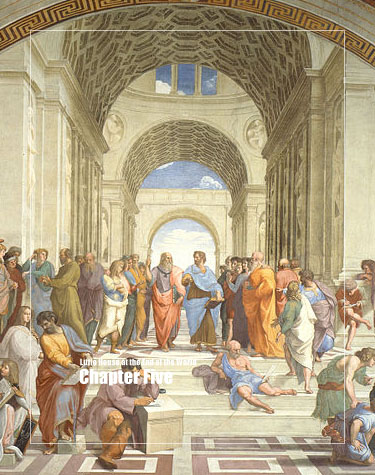 We'll be Friends Forever, won't we, Pooh?' asked Piglet. Even longer,' Pooh answered.” – A. A. Milne

That is where Kate and Kris had become friends. The two women had balanced childcare and muralling as they worked on Zimmerman's recreation of "The School of Athens." Zimmerman could have hired any famous living artist he'd wanted to but on his frequent visits to the Greene home he was always delighted by Kris' paintings there.

If the truth be known, Zimmerman preferred the strong hand of a trusted colleague over the acclaim of the culture in choosing his partners for any project. Elizabeth and Martin had laid out the Big Diomede campus and designed the modest, but tasteful buildings joined by simple colonnades. The campus was set on the edge of the island, perpetually open to the East and the rising sun. Since no classroom was bigger than a suburban living room, Zimmerman's Swedish friend produced the campus buildings in his Virginia production center.

Kris had even shown Rupert the painting she was 'hiding' as a discreet mural in the parsonage. The tradition of their faith was that they would often move on to a new field of ministry. One of Zimmerman's favorite stories from a childhood book was that of a Methodist minister who always planted a young tree at each parsonage that he would never enjoy the shade of. The purpose was to bless the families that would come after. Generations later children would play in the shade of a stately oak. The Greenes brought that story to life as Kris sought to do that with her murals.

Inside Kris' house on Big Diomede. The college is visible through the window.
Painting by Lola Dalton (the author's grandmother)

She had initially protested Zimmerman's request that she paint "The School of Athens," but in the end reluctantly agreed. Taking Kate under her wing made the project sweet. As the two women wrestled with the folds of tunics and the contorted coffers, Kate shared the hopes and fears of every young woman. Kris was a wonderful mentor, sharing from her own story to encourage her young apprentice. That Summer flew by... the one Kate had so dreaded. It was a tearful ending as Kate returned to school in the 'lower 48.' She looked forward to her return the following Summer.

One of Kate's most voiced laments was that: "good men were hard to find in the lower 48!" With few meaningful career paths left to them, many lived in a sort of perpetual adolescence... like actors in a beer commercial, they played and sought 'experience,' but few of them sought significance. Encouraged by the Greene's love story, she had been given a larger perspective. Indeed it was the NEXT Summer that Kate had met her husband, one of Greene's seminary students at the new college. Here was a man who indeed quietly planted so that others who followed might reap the bounty... a man of the NEW American frontier!

His name was Joe, just like the name of her beloved grandfather! Joe had had an interesting life. He'd tasted redemption after a troubled youth. He was a serious student of the Bible... but not as a detached interest. He'd seen it as a blueprint for remaking his life! He came to Big Diomede as a supervisor of the installation of the Virginia-built houses. Greene was offering some course that interested him and he ended up as one of the Pastor's favorite students. Naturally, the friendship began around the Greene's dinner table. When Kate returned to school in the 'lower 48,' the letters flowed regularly.

Kris, though she enjoyed new technology, never lost the sense of the flavor of a hand-drawn card or letter. She seemed to carry over the sensibilities of a bye-gone century as she inhabited the 21st. How she enjoyed mentoring Kate in the art of high romance! Indeed, she was an enabler... she had snuck the colored pencils and deckle-edged paper into Kate's grandfather's room as he reconnected with Willa! Now she was at it again. 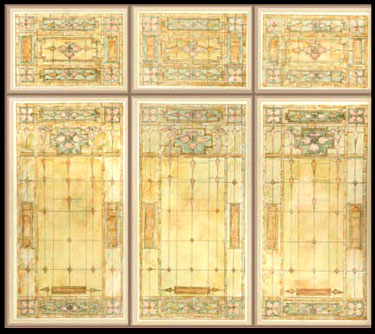 Stairwell window at the college. Painting by Lola Dalton