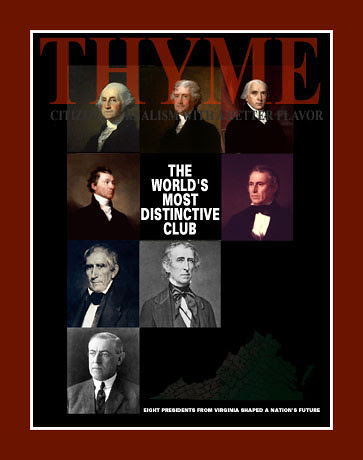 The World's Most Distinctive Club

Eight men from Virginia shaped the world we live in. The 'other' weekly news magazine this week calls the fraternity of Presidents: "the most exclusive club in the world." Virginia is sometimes referred to as the "Mother of Presidents" because eight U.S. Presidents come from the state.

Thomas Jefferson, who drafted the Virginia Statute of Religious Freedom and the Declaration of Independence was our third President. He bought the Louisiana Purchase from France and more than doubled the size of the country for 15 million dollars. Napoleon Bonaparte badly needed the money. The Mississippi River would open up a whole new world. Jefferson also asserted America's right to the seas by standing up to the Barbary Pirates.

James Madison, our fourth President, is known as the Father of our Constitution. He was President during the War of 1812 when Washington City was burned by the British.

James Monroe was next in line. He had been sent by Jefferson to France to negotiate the Louisiana Purchase. His Monroe Doctrine told European powers to stay out of South America.

William Henry Harrison was our ninth President. He had fought in the War of 1812. He has the dubious distinction of having been killed by his inaugural address. Contracting pneumonia after giving the speech on a very cold day, Harrison died a month after taking office. His was the shortest term of office of any American President.

John Tyler, his Vice-president succeeded him, becoming the tenth President of the United States. He was referred to as "His Accidency" because of this. He was the first President to be married while in office.

Zachary Taylor, of Orange County, Virginia, became our twelfth President. A career soldier who had fought in the Mexican War, President Taylor died after sixteen months in office.

Woodrow Wilson, born right here in Staunton, Virginia, became our 28th President. He was President during World War I and aferwards worked to establish the League of Nations. A leader of the Progressive Movement, Wilson pursued an agenda that included the Federal Reserve Act, Federal Trade Commission Act, the Clayton Antitrust Act, the Federal Farm Loan Act and an income tax. Interestingly enough, Wilson's early career took place far from Virginia. He was President of Princeton University and then Governor of New Jersey before running for President in 1912.

Obama staffer Hilary Rosen has hit a nerve when she says that Ann Romney hasn't 'worked.' In Rosen's eyes, taking care of five children is not 'work' of importance. My Mother raised five of us and once rolled her eyes when Barbara Walters admitted she didn't know where to buy Gatoraid! Mom had worked in the engineering department of the Martin Company. After she married Dad, she would take her slide rule to the A&P Grocery Store and do her own 'unit pricing' before the stores instituted it. She would illustrate Zeno's Paradox by continually dividing the last piece of the last piece of pie.

This was one of Mom's best lectures. She'd cut the pie into eight pieces instead of the flawless seven she usually did. Then she'd keep dividing until the pie filling refused to cooperate with the lesson. Her kitchen was a place full of learning and wonder.

We raised our young daughter with a program called Joy School in her preschool years. Mom would have loved it. Richard and Linda Eyre, a couple in Utah invented it. [1.] I'm sure Ann Romney availed herself of resources like this.

The administration distanced themselves from Rosen's remark, but the remark was an honest window into the thinking of those who are running the country right now.

"Of course they had to disown Hilary Rosen. She was egregiously honest. She told people exactly what she genuinely believed. She has no understanding of; and no respect for a woman who could do anything with her life and considers raising her children the highest possible calling. Hillary Rosen considers this a waste of time and talent. It makes her a perfect representative of the anti-traditional left. The only thing she did wrong, in the reptilian eyes of David Axelrod, was publically admitting it." -- Red State

In fact, Red State wonders about The Administration's Record [click to read] on paying female employees.

"But looking at Proverbs 31, we run the risk of cheapening the true value of a person if we reduce her to simply a wage earner, albeit a powerful one. A while ago I asked a young artist to help me in the studio. I told her: "I'm not going to pay you what you're worth, I'll pay you what the job is worth. If I had to pay you what you are worth I couldn't afford you." That distinction comes to mind as we ruminate on the value of our wives and daughters to our family and society. Every now and then someone will try to assign a number value to the service of a women who takes care of her home and family (not working outside the home). It is always in six figures and that calculation makes a great point. There are many great people who's influence far exceeds their monitary earnings and society is the richer for it."

Lynn Has This to Say [click to read] as a homeschooling Mother who raised and educated her own children:

"So some parents don't think it "takes a village" to raise our children ... we take the responsibility of doing it ourselves. Not every stay-at-home mom is rich ... we sacrifice, scrimp, and do without to create a family atmosphere. Barack Obama's "female gap" advantage may have just taken a blow. Why can't liberals MYOB?" -- Lynn Mitchell

My suspicion is that the administration is well aware of what an asset Mrs. Romney is to her husband and her family. Otherwise, why would they bother to attack her?

Chuck Balsamo Writes in Chapter Seven of Make Me a Legend:

"Solid research by Salary.com showed that in 2006 a stay-at-home mom needed $134,121 per year to be adequately compensated for her multiple roles and her 91.6 hours of weekly toil. The mom who works outside the home is given an estimated value of $85,876 for her 49.8 hours of mom-work per week.

And how much does Mom make? Nothing! Not a big deal, because Mom doesn’t work for dollars; she does what she does for the personal satisfaction of seeing things go well for the people she loves. Without applause or other appropriate acknowledgment of achievement, Mom chooses to work her wonders in the shadows of the visible triumphs of her husband and her little ones!"