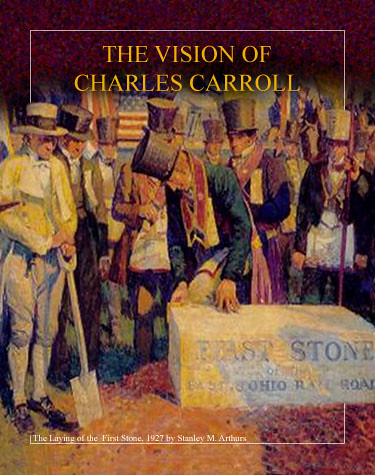 The Vision of Charles Carroll

July 4, 1828 the last surviving signer of the Declaration of Independence took part in an important ceremony as he turned the first spade of earth at the symbolic laying of the first stone of the Baltimore and Ohio Railroad. Fifty-two years after he put his name to the document that began our nation, Charles Carroll of Carrollton participated in an event that looked to her future. Indeed, inspired by the Ellicott Brothers [click to read], Carroll had already diversified agriculture on his large estate in Howard County, Maryland. He had helped build flour mills and limestone mills that in turn helped to create a more sustainable agriculture. The Quaker Ellicotts had migrated to this "picturesque wilderness" from Bucks County, Pennsylvania and partnered with Carroll, a Catholic, to move the region away from single crop plantations and enrich the soil with ground limestone, a practice that continues to this day. Now the ninety year old patriot was breaking ground for the prototype railroad. It was not exactly like the modern rails on cross ties we are familiar with, but rather iron straps laid on top of two continuous granite "curbs." The first motive power was horsepower. Horses actually pulled the carriages along the rails. A wind powered wicker car was even experimented with before the famous "Tom Thumb" steam engine gave challenge to a horse drawn train carriage in the now legendary race. [2.]

I consider this among the most important acts of my life, second only to my signing the Declaration of Independence, if even it be second to that.” Carroll said of the moment. The stone, laid in a field outside Baltimore, was also a time capsule, into which were placed a copy of the company's charter, newspapers of the day and a scroll bearing the words: "This Stone is deposited in commemoration of the commencement of the Baltimore and Ohio Railroad. A work of deep and vital interest to the American people. Its accomplishment will confer the most important benefits upon this nation, by facilitating its commerce, diffusing and extending its social intercourse, and perpetuating the happy Union of these, Confederated States. The first general meeting of the citizens of Baltimore to confer upon the adoption of proper measures for undertaking this magnificent work, was on the second day of' February 1827…” [1.]

The railroad would eventually do all of these things as a vast nation would be joined together by her steel rails. The Nineteenth Century would see her span from sea to sea to become a country her founders could scarcely have imagined!

Charles Carroll had been born in September 1737 in Annapolis. He attended Jesuit colleges in Maryland and France, before going on to study law in Paris and London. In 1765 he returned to Howard County and took charge of the Carroll family's vast estate there. Catholics in Maryland before independence were not allowed to participate in politics, practice law or vote, but Carroll became influential as a writer of tracts against taxation without representation under the pseudonym "First Citizen." In 1776 he was appointed to the Continental Congress. Although he was not present for the vote for independence, he was one of the first signers. He added the distinct identifier: "of Carrollton" to distinguish himself from a number of relatives having the same name. After independence was won, Carroll became a Maryland State Senator in 1777 and eventually became a United States Senator representing that state.

In 1800 he left political service and was instrumental in building canals and the establishment of the Baltimore and Ohio Railroad Company. His farm in Howard County became a model of improvements in agriculture. He died in Baltimore in 1835 at the age of 95.
Posted by Bob K. at 1:00 AM
Labels: Charles Carroll, citizen journalism, Citizen Journalists, History, Roads to Rails, Thyme Magazine