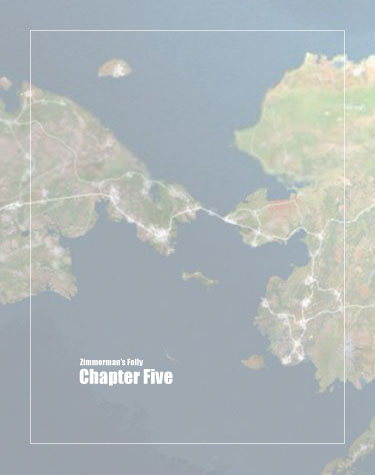 1.Invention is rarely created in a vacuum. 2. Always read your colleague's/competitor's white papers. 3. The flashy guy who gets all the big grants just sometimes aint all that smart, and 4. Persistence, hard work and humility is always a great combination in any situation." -- M. K. Wharton

Our world of today revolves around things which at one time couldn’t be done because they were supposedly beyond the limits of human endeavor….don’t be afraid to dream.” -- Joseph Baermann Strauss

The building of the Bering Strait Bridge had involved the consideration of a dynamic design problem of epic proportions. Though investors thought Zimmerman's proposal a simple expansion of projects done elsewhere, it was in truth a project that involved new ventures into the unknown. Years before, someone had proposed a tunnel between Russia and Alaska. The fact that the sea floor itself was in motion made that an impractical solution. Add to that the strong ice-filled currents of the Strait and the vicious storms that sometimes swirled through and you had a lot of problems that had to be solved. Computer modeling always seemed to miss some subtle, but important part of the puzzle. O'Malley had given up pretty quickly on doing so, as Rupert had resorted to scaled down models of his bridge sections which he placed into the actual currents of the Strait. Detailed structural analysis on real models taught the designers far more than electronic simulation.

The design process had precedent in the United States space program in the 1960's. When President John F. Kennedy proposed putting a man on the moon and returning him safely to Earth, he was using German ICBM technology and rockets that had about a 50% chance of actually surviving launch. American engineers had developed the new field of aerospace structural dynamics to refine the rockets. Their tools were machines that simulated the vibrations and stresses that actually occurred during launch. An engineer in Greenbelt, Maryland had actually created what he called the "Launch Phase Simulator." It was a giant centrifuge, which simulated the increased gravity forces of lift-off. There was a vibration machine in a vacuum chamber on the end of the centrifuge arm. Inside the vacuum chamber were lamps to simulate sun exposure and cryogenic tubing to simulate the cold.

The combined stresses that could be studied using this method allowed engineers to see what they were missing in analyzing isolated phenomena. American rocket technology moved forward to a more dependable launch vehicle. Rupert found some of the old documentation of this work and he, Martin and Elizabeth studied it to develop their own methodology.

Zimmerman had listened in horror to the broadcast when the space shuttle Challenger blew apart. A cold morning had caused an "o" ring in a solid fuel booster to compress, creating a leak where the heat of combustion caused the explosion of the fuel tank. Apparently the computer model had missed this. The old "bench-test" guys had been replaced by the "whiz kids" with computer analysis. One engineer of the old school had, in fact, tried to delay the launch. He suspected something like this could occur, but could only share his speculation. He was overruled and the fateful launch went on.

The shuttle Columbia was destroyed as her heat shield of fragile ceramic tiles had been unknowingly damaged during launch. Re-entering the Earth's atmosphere, the breach in her shield had caused the heat of reentry to destroy the ship and her crew. Space flight was never without risk, astronauts Grissom, Chaffee and White had perished in a fire that engulfed their Apollo I spacecraft. Apparently a spark ignited their oxygen-rich atmosphere inside the ship during a routine preflight systems check. Apollo XI almost didn't make it off the moon. One of the astronauts had broken an essential fuse going in or out of the craft. 'Buzz' Aldren had used a ball-point pen to facilitate a makeshift repair. Without that pen the astronauts would have been stranded on the moon! 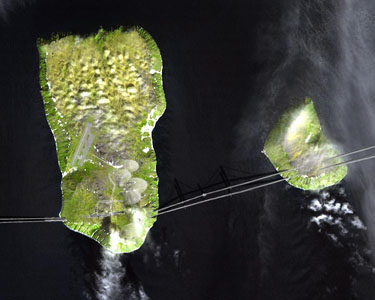 The Diomedes as seen in satellite imagery.

Bridge building itself had a long history of danger. Washington Augustus Roebling, son of John Roebling who designed the beautiful Brooklyn Bridge, engineered two pneumatic caissons that allowed men to build the foundations of the two towers. In 1870 a fire broke out in one of the caissons and Roebling was able to extinguish it. He did suffer from the bends, or decompression sickness as a result of his time in the cassions, forcing him to supervise much of the work from his home overlooking the bridge. The towers and spans of such projects were dangerous as well. “Bridgemen” at the turn of the century were known for reckless daredevilry.

Zimmerman admired the work of Joseph Baermann Strauss, chief engineer of the Golden Gate Bridge in San Francisco. [1.] Strauss' father was a Bavarian painter and his mother was a musician. He grew up in a home that looked out on the 1,057-foot-long Covington-Cincinnati bridge. The bridge was, at the time it opened, the longest suspension bridge in the world. Hailed as a visionary, poet, builder and dreamer, young Joseph injured himself in an attempt to play for the university football team. Legend has it that he took in the view of the great bridge from his bed as he recovered, inspiring his future career. Strauss’ undergraduate thesis, presented in 1892, actually proposed a bridge across the Bering Strait, connecting North America and Asia. [2.]

His magnum opus would be the Golden Gate Bridge, completed in 1937. Strauss was appalled that a project at the time typically lost one life for every million dollars spent according to the actuaries. Looking at a $40 million dollar project, he refused to lose the lives of forty men to do it. Strauss put into effect the most rigorous safety code ever enforced on a project. He required all workers to wear Edward W. Bullard’s hard hats, first created for coal miners. The bridge workers all received a modified version of the Bullard hat. Respirators, glare-free safety goggles and special hand and face cream to protect workers from the cruel winds were also required.

A safety net was suspended beneath the roadway during construction and is credited for saving nineteen lives. Strauss even built an on-site field hospital at Fort Point. The men were fed carefully formulated diets, believed to help fight dizziness. Hung-over workers received a specially formulated “sauerkraut cure.” Most important, Strauss strictly enforced his rules: “On the Golden Gate Bridge, we had the idea we could cheat death by providing every known safety device for workers,” he wrote in 1937 for The Saturday Evening Post. “To the annoyance of the daredevils who loved to stunt at the end of the cables, far out in space, we fired any man we caught stunting on the job.” In spite of such diligence, eleven lives were still lost. Most of the men died when a scaffolding collapsed and fell through the safety net. 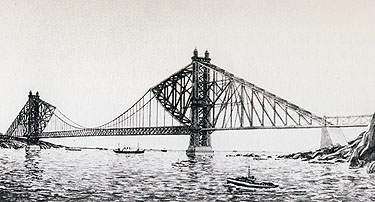 Though he did obtain a reputation for great safety engineering, Strauss failed in some important areas. His work prior to the Golden Gate Bridge was in building smaller projects and this time he may have taken on more than he could handle. His initial proposal was an awkward combination of truss and suspension bridge and the design was rejected. Undaunted, he hired Charles Alton Ellis to complete the design. Ellis drew out the graceful structure that was actually built. In Ellis, Strauss had his Martin O'Malley to round out his team; But there was a problem: Ellis was a serious engineer and Strauss grew impatient as the conscientious Ellis exhaustively checked his own calculations. Strauss had made Ellis Vice-president of the operation and had originally lauded the skills of his colleague, but there came a time when Strauss told Ellis to go on a long vacation. He then wrote Ellis a letter telling him not to come back. When the bridge opened in 1937 there was no attribution made to Ellis for three years of excellent work.

Strauss' show of ego might well have resulted in a tragedy similar to the 2007 collapse of the I35W Bridge over the Saint Anthony Falls of the Mississippi River in Minneapolis, Minnesota. During the evening rush hour, it suddenly collapsed, killing 13 people and injuring 145. The reason was an improperly specified gusset plate. The error was not found prior to construction. Ellis continued to check his calculations, working unpaid, and presented areas of concern to the Golden Gate Bridge design team. Needless to say; Zimmerman and the O'Malleys found this a sobering and important lesson. They came to treasure their collaboration and collective abilities all the more as they faced new challenges in their own work.

Elizabeth, Martin and Rupert simulated their own macabre set of 'occurrences' in an effort to ensure that the risks of their great bridge would be minimal. After they had constructed half-scale models of their pre-manufactured bridge sections and placed them in the strait they simulated ship collisions, terrorist explosions, even submarine cutting of the anchor cables. They built a shear-factor into the tube sidewalls to direct the energy of an intentional explosion outward, hopefully saving the structure itself. The trade-off was that a large collision, such as the one that occurred when Abdul jackknifed, also would break through the wall. They simulated the repair and replacement of damaged sections in winter currents. Their plan was to initially manufacture "extra" sections to replace any that became damaged beyond repair or destroyed. The "extra" sections would eventually become the twin span and then more sections would be fabricated on a "pay as you go" plan to become a third crossing over St. Lawrence Island.

Here Rupert looked at how the Bospherous had been bridged in Turkey. The initial span, built in the Twentieth Century, had required heavy security in the volatile Middle-East. Eventually a second "beltway" span sealed the reality that the Bospherous could always be crossed. Elizabeth noted that people who enjoyed the prosperity of commerce were less easily radicalized. She planned to spread the wealth that resulted from her father's great work. 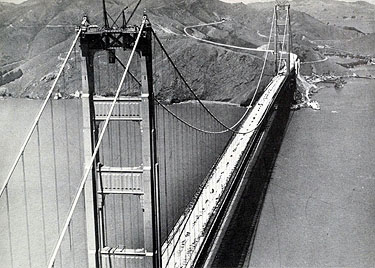 When his initial design for the Golden Gate Bridge was rejected, Joseph Strauss hired engineer: Charles Alton Ellis to create the design that was actually constructed, shown here in this California Highways and Public Works Photograph from 1937. 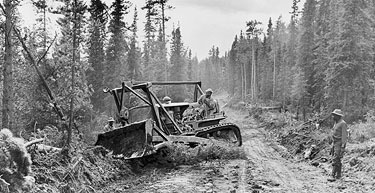 Construction on the Alcan Highway. The road was built in 1942 and completed within a year as part of the war effort. 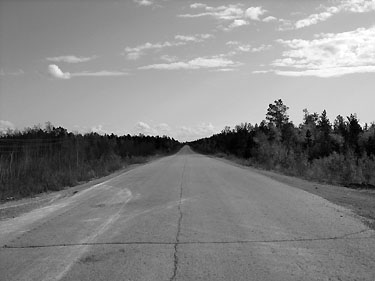 M56 near Yakutsk prior to being upgraded as part of the Bering Highway.
Photo by Andrey Laskov. 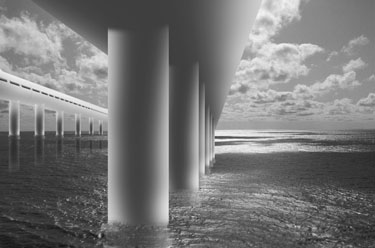 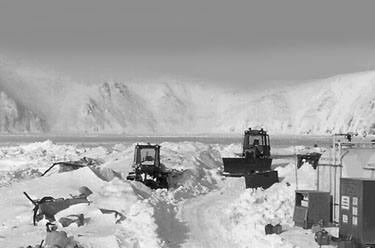 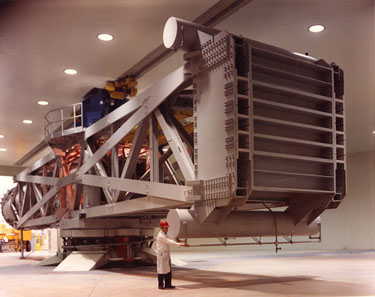