My 'Joe Wilson' Moment at the Senate Building

Sometimes It Just Comes Out when Someone's Lying... 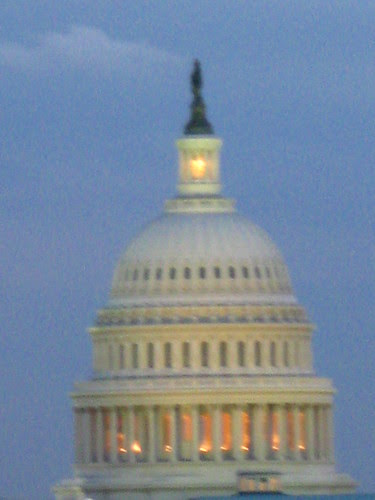 Read some history. Debates weren't always pretty in our Country's early days either.

You probably shouldn't read from the Prophet Jeremiah before going to Washington but I did. Jeremiah, you may recall, is the one who was locked up because he was the honest one who kept telling the king that the Babylonians would conquer them if they didn't change their ways.

We were ushered into a large room by Senator Warner's staff and a staffer was taking questions and listening to concerns. A younger staffer was assisting him and although I didn't agree with her conclusions I could see her general knowledge of the subject was good. Substantive argument was possible with her and some good discussion followed. She discussed topics such as how to capture younger workers into the insurance system and portability.

The older staffer, when asked why some simple concerns such as tort reform and competition couldn't be dealt with in single pieces of legislation began to wax eloquent on why we have to do this whole thing NOW!!! The staffer was talking Democrat talking points... the citizen had a good point. Fix things one at a time, simple things first. That's how my Dad taught me.

But the older staffer said "I've been in Washington over twenty years!" he was the one with the experience so we'd better just listen to him. "We've got to do all of this, all at once!" he reiterated. "It [reform] can't be done if we do it piecemeal..."

I didn't really mean to but I found myself saying out loud: "If the car needs a tune up, you don't pull the engine!" I was asked to be quiet but I found myself understanding Joe Wilson a little better. I hereby submit myself to my fellow bloggers for censure [that's what happened to Wilson, right?]

I made a point to thank the staffers for their time as I left. One should at least try to fight with honor... and Public Servants Need to Remember Who They Serve [click to read].
Posted by Bob K. at 10:24 AM
Labels: 12/15/09, Joe Wilson, Mark Warner