The Movie You Must See Before You Vote 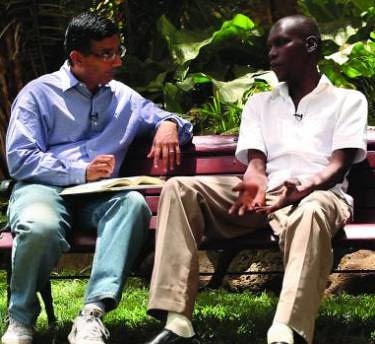 Denesh D'Souza, shown here interviewing the President's brother George Obama, presents a scholarly explanation of who our President really is and who influences his policies.

The  Full-length Version [click to view] of the film appeared on Netflix Saturday morning. You may view it with a Netflix account or at a theatre near you if at all possible. It is well worth the money and the artists who made it are deserving of our support. One viewer writes:

"I expected a movie that would be a "rant" about Obama. But, instead, it was a well-researched documentary from a man with a similar background who sees the world from a broader perspective than most Americans--much as Obama probably sees it having lived in Indonesia and have an African father.The movie explains the philosophical influence of Obama's father through interviews with friends of his father. It also delves into the mentors that Obama has in his youth. No doubt, the influence Obama has had on the U.S. reflects this view of a European country, which is essentially what America is, and how we interact with the rest of the world. The premise of the film is how America will change by 2016 during a second obama term based on the decisions he has made and his underlying philosophy that has become more apparent as he is in office. In effect, the military cuts, heavy indebtedness, philosophy outlined in speeches in foreign countries, dislike of Israel, etc. are considered from the world view of Obama's father and his mentors who were largely communist, socialist, far left ideologues or generally anti-American and anti-white. The film is well-researched and, while much of the information is available, has not been provided to the voters in America. Without a doubt, any voter should see this movie before the next presidential election before deciding how to case a ballot."