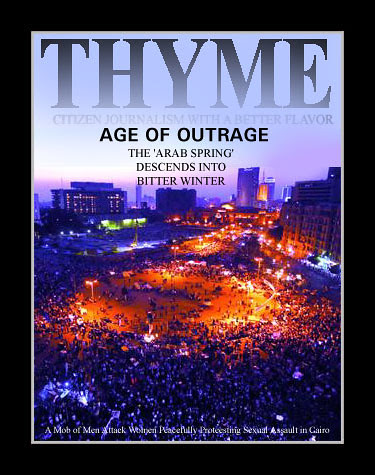 The 'other' weekly news magazine this week features the cover story: 'Agents of Outrage,' actually musing:

"A chain of violence from Cairo to Benghazi raises the question, Did the Arab Spring make the Middle East more dangerous?"

With the murder of U.S. Ambassador to Lybia, Christopher Stevens, the question is really just how dangerous has the Middle-East become and how do we address that cold reality? The fact is, this danger has been brewing for a long time. Sadly, many people who long for peace are caught in the crossfire as radical Islamists seek to take the world back to the Sixth Century with Twentieth Century weapons. In the Seventeenth Century the Ottoman Empire laid Siege to Vienna. They were turned back on September 11, 1683 by Polish forces who helped save the city. In 1801, Thomas Jefferson had to fight the Barbary Pirates of Tripoli. History has a way of repeating itself.

The year was 1979 and My Mother was teaching physics labs at Howard Community College. During the Iranian hostage standoff she befriended a yound Iranian student who was understandably afraid and confused by the whole situation. Her friendship certainly helped this young man through a difficult time and taught us that we should always remember that the world is primarily populated by beautiful individuals, not idealogies.

The Shah of Iran, not unlike Hosni Mubarak, was a leader friendly to Western nations and a supporter of modern ideas... to a point. Religious minorities were somewhat protected in the Sha's Iran and Mubarak's Egypt. Though both men have a mixed record on personal liberties and surpression, they generally presided over societies that were stable and presented the possibility of reform. Today Sharia law in the region threatens to undermine basic human liberties, ushered in by a revolution seeking Democracy.

The U.S. really has only one dependable ally in the region now, Israel, yet the narrative of Israel as oppressor persists in the media and the academy. Binyamin Netanyahu is one world leader who's level head is most needed now more than ever. Our President's failure to meet with Netanyahu is deplorable, given the serious state of affairs in the world today. Our prayer is that the best minds in leadership might restore stability and peace to a region that has for centuries seen far too little of either.

Revival, The Answer to Our World Crisis
by Chuck Balsamo

"The trouble in the world today, the stagnation, the moral desolation in America... is not due to the strength of humanism, it's because of the weakness of evangelism. People don't get born again when they come to the alter. They come dammed and they leave it dammed. They're not born. People can't be born in 5 minutes, put off 10 million sins... change the way of life, put off the old man, put on the new man... by just standing there in tears." -Leonard Ravenhill

I just translated these words from a 1989 interview with the late Ravenhill.

...He spoke of the need for a great outpouring of God in our churches. He called for attendance and passion in prayer meetings... and the need for a sweeping revival in America and throughout the world.

If they needed it then, we need it more today.

Dear God, use me (and the tribe I lead, and the others who share our dream) at the front lines, to give America her greatest awakening of all.