What Do We Really Learn from Observing the Cosmos?

"In its purest form, the human spirit of inquiry is a holy thing. According to the renowned 12th century Jewish thinker Maimonides, nothing less than the Biblical commandment to love G-d is fulfilled when a person investigates nature and, struck by its intricacy and beauty, is filled with awe and gratitude to the Divine." 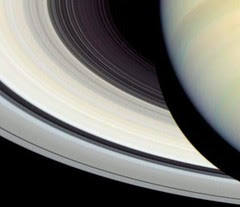 The rings of Saturn.

Photographs of galaxies and microscopic worlds have always fascinated me. There is sublime order in the extreme places of our investigation. Here is an Article About a Supercollider by Rabbi Avi Shafran in Jewish World Review. He calls the project an $8 Billion, Modern Day Tower of Babel."

If you remember the Bible story, the Tower of Babel represents mankind trying to assert their independence from the Divine. It ended in a confusion of tongues. You'd think we would learn. I remember when John Lennon proclaimed the Beatles "Bigger than Jesus" -- right before the group dissolved! A similar attitude seems to have gripped some scientists hoping to find a "G-d Particle" and thus reducing the cosmos to naturally explainable.

When the Cosmic Background Explorer read the background spectrum of the universe, scientists were looking for the bang in the "Big Bang." The clear spectrum they found was not exactly what they expected. It doesn't exactly negate the possibility of a moment of Creation. In fact, those who seek to do so may find G-d very difficult to dethrone.

"For the invisible things of him from the creation of the world are clearly seen, being understood by the things that are made, even his eternal power and Godhead; so that they are without excuse:" -- Romans 1:20
Posted by Bob K. at 5:02 AM
Labels: Intelligent Design, NASA, Science