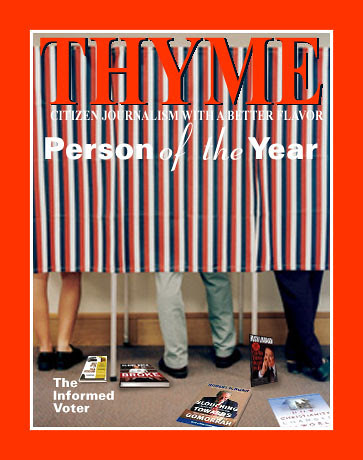 Thyme's Woman and Man of the Year:
The Informed Voter

The 'other' Weekly News Magazine [click to read] anguished over whether or not to honor Julian Assange or the Chilean Miners. I'd have gone with the miners, but TIME finally settled on Mark Zuckerberg, the founder of Facebook. Why not Al Gore? Without his invention of the internet, neither Assange or Zuckerburg would have a platform. In fact, Al Gore invented Global Warming AND the Internet, making him even more of a candidate for 'Man of the Year.'

THYME had no such dilemma. This year was the year The People read the Constitution and went to the polls to take their government back. The movement defied MSM attempts at description because it had no one identifiable leader. It was not so much a Republican resurgence as a movement that took root in the party who's platform most accurately reflected their core values.

It began as the Tea Party, but it has become so much more than gatherings of Conservatives and Constitutionalists in large public spaces. It is a resounding of Jefferson's statement that: "the most important level of government is local."

A new wave of citizen-candidates is stepping up. They're young, energetic and able to articulate the principles that will guide them. Look for off-year elections to become very exciting.

The books featured in our cover art. 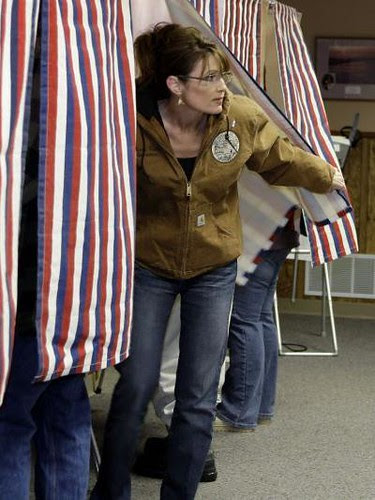 Zogby has This Poll [click to read] showing a very different result for 'Person of the Year' when you asked the people.
Posted by Bob K. at 6:53 PM
Labels: Citizen Journalists, Thyme Magazine

John LeBoutillier has these thoughts.

According to the Huffington Post, Julian Assange has been making appearances on Saturday Night Live expressing some bitterness that Mark Zuckerberg was named 'Person of the Year' by the 'other' weekly news magazine. To Quote Assange: