You're Skills as a Community Organizer Paid Off 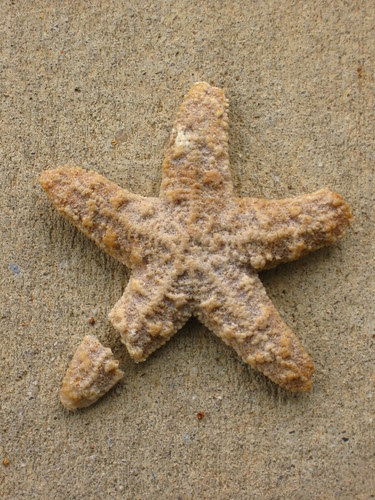 When a starfish loses a leg it grows a new one.

Andrew Breitbart got up to speak at the National Tax Day Tea Party. He remarked that President Obama had just spoken in Miami at one of those thousands of dollars a plate fundraisers for big Democrat supporters [$30,400-per-couple] [1]. Touting his "middle class tax cuts" and other "promises" he's "kept," he had said the following:

"And so I've been a little amused over the past couple of days where people have been having these rallies about taxes, taxes," Obama said. "You would think they'd be saying, 'Thank you!'"

So, I really think it's time to say "thank you, Mr. President."

Riding up on the bus from Culpeper to Washington we were joined by Richard Viguerie, who has decades of experience electing Conservative candidates. He talked with wonder about the "leaderless" Tea Party movement that Mr. Obama has almost single handedly brought to life.

"For years I've been wanting to see this" Viguerie stated. The problem is not Reid, Pelosi and Obama but the vacuum that our inaction has allowed that permits them to exist. He went on to tell us the story of the Spider and the Starfish:

Cut off the leg of a starfish, it will grow another one. Cut off the head of a spider and you have no more spider. When the Spanish Conqistadores arrived in America they met Montezuma, head of the Aztec Nation. Once they did away with Montezuma the Aztecs were soon no more. The Incas presented a similar challenge. They too fell to the Spaniards.

The Apache Nation, on the other hand was to prove unconquerable. There was no single leader to eliminate. Thus the Apaches resisted Spanish rule successfully for many years.

That, Mr. Viguerie said, is our strength. Alost spontaniously this movement has come to life and it has many creative voices. It's no Astroturf, it's a Prairie Fire! For years, beginning with the Goldwater Campaign, Viguere dreamed of creating a self-energizing popular Conservatism. His direct-mail campaigns brilliantly presented men like Ronald Reagan and helped elect them.

Reagan proved to be one of the few who could keep the message in front of the people. Republicans lost their unique message and lost their mandate to govern in the process.

So Thank You, President Obama, for inspiring so many of us to stand up and do our part to preserve this great and precious gift... America!
Posted by Bob K. at 9:27 AM
Labels: Barack Obama, Taxation, Tea Party