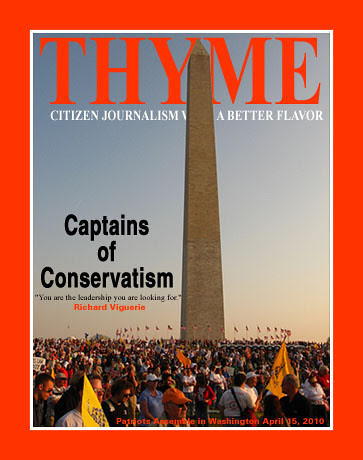 "You are the leadership you are looking for. Arm yourself!" Viguerie played a huge role in bringing about the Reagan Revolution but his roots are in William F. Buckley.

Rush Limbaugh and others have brought Buckley's thoughts to millions.Many of these people are ready to go to the source. At a Virginia Sovereignty rally Mr. Viguerie challenged us to do just that. 'Knowledge is Power.' Patriot, Empower Thyself!

We're ready to read the 'classics' as he calls them. We're the leaders that need to be in place to turn the country around. 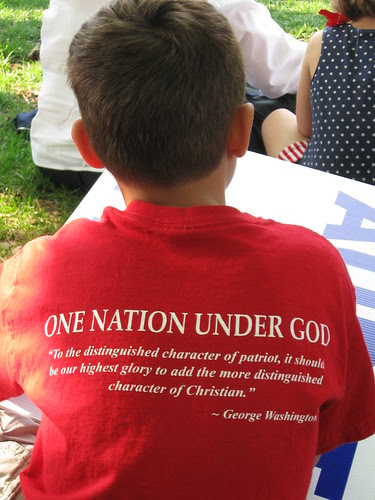 "G-d may have given America one last chance." -- Richard Vigueri

'Fourth Leg' of the Conservative Movement

CULPEPER, Va., April 15th /PRNewswire-USNewswire/ -- Richard A.Viguerie, Chairman of ConservativeHQ.com, told hundreds today at the Constitutional Tea Party's April 15th rally at Yowell Meadows Park in Historic Culpeper, Virginia their activism could be America's last chance to restore the Founding Fathers' vision for America. "The Tea Parties are an unfettered new force of the middle class tapping into the anger and disappointment felt not only towards Republicans and Democrats, but most major American institutions such as Wall Street, education, Hollywood, the media, big labor, and others who have betrayed their public trust," said Viguerie.

"This new force, unlike most conservative leaders, is unfettered by old relationships and ties," said Viguerie. Viguerie expressed his belief that the principles and philosophy championed by the Tea Parties constitute a fourth leg of the conservative movement.

"G-d may have given America one last chance to restore the vision of our Founding Fathers and empower citizens over their government," stated Viguerie. Yowell Meadows Park in Culpeper is where the Culpeper Minute Men assembled. It is April 15, 2010 and I'm listening to Constitutional Lawyer Michael Farris and Richard Viguerie befor boarding a bus for Washington, the Virginia Sovereignty Rally and the National Tax Day Tea Party. Sovereignty will be center stage today and is the subject of Mr. Farris' talk. 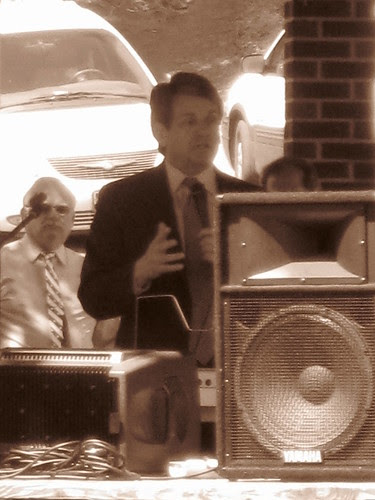 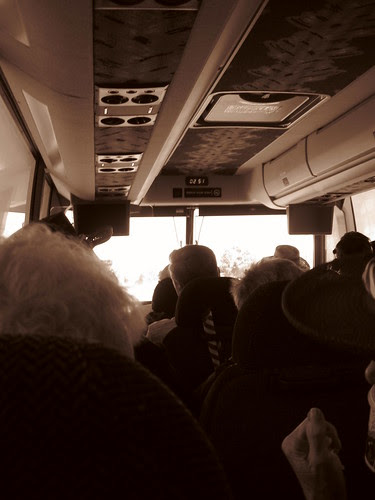 Now it's off to Washington. 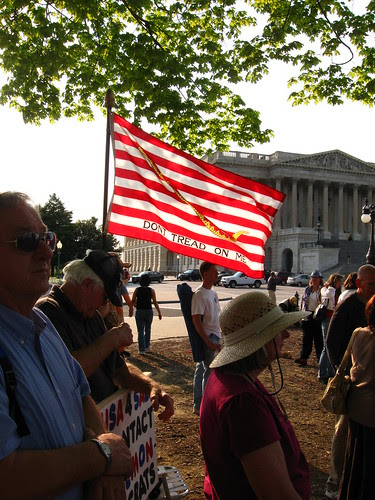 Virginia Sovereignty Rally at the US Capitol.

More Pictures of the Virginia Sovereignty Rally [click to read]

Thousands at the Washington Monument 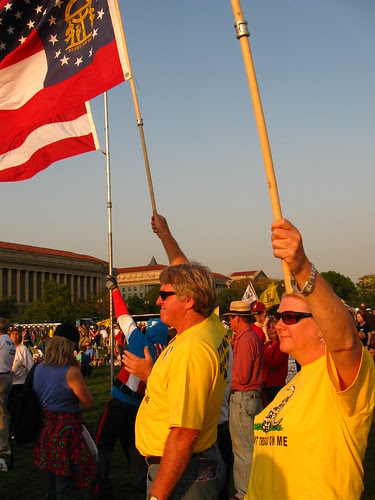 A group of patriots from Tennessee... 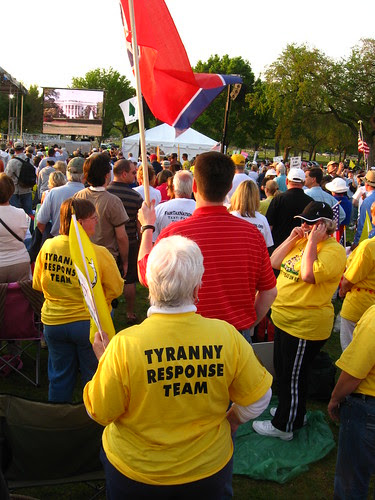 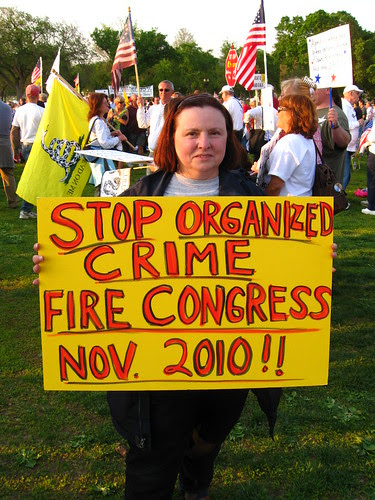 This lady showed up before Michele Bachmann likened them to gangsters! 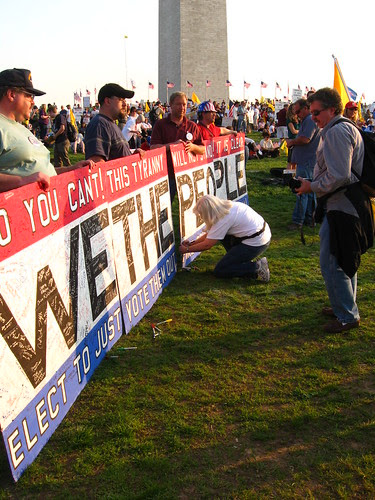 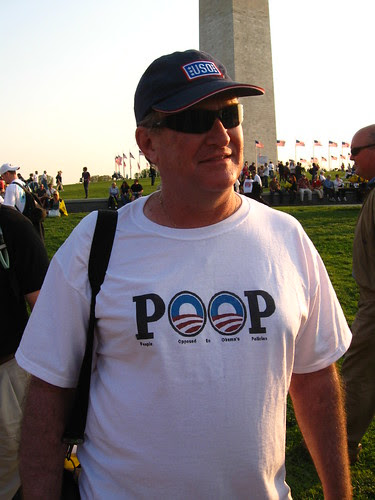 People Opposed to Obama's Policies... my favorite tee shirt message at the rally. 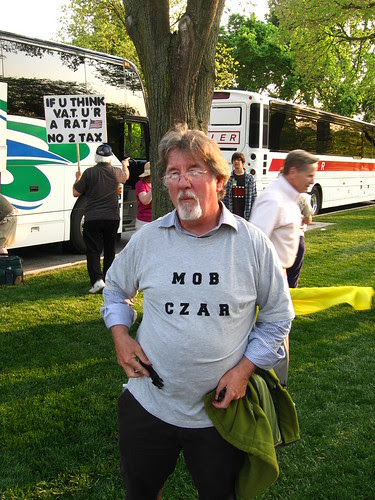 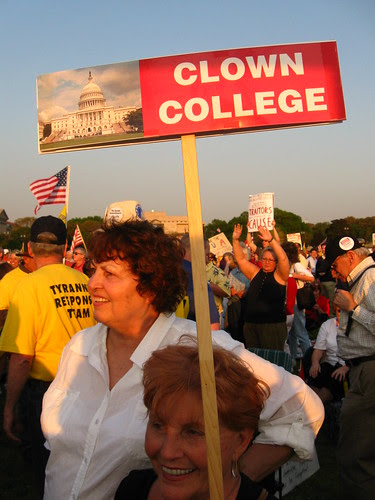 ...and doesn't this mob look angry? 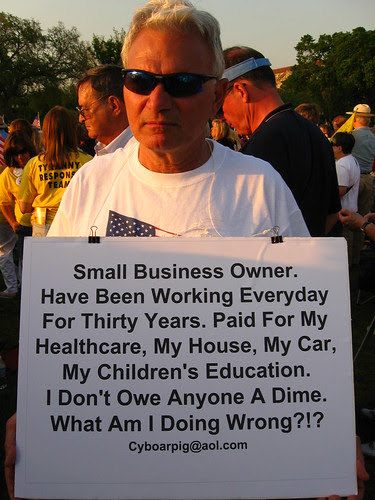 What am I doing wrong? this business owner asks. 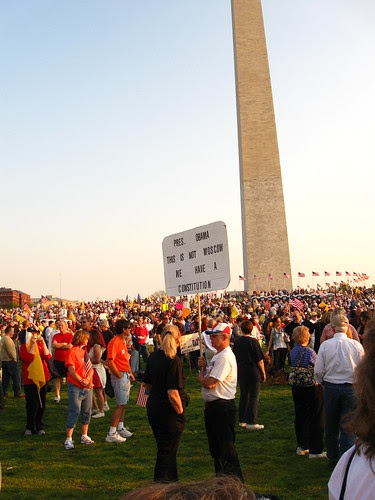 People kept streaming in around the Monument. The crowd grew to possibly 100,000. By the time the speakers started there was no more grass visible.

Speaker portraits from the jumbotron, But later I was 25 feet from Michele Bachmann... 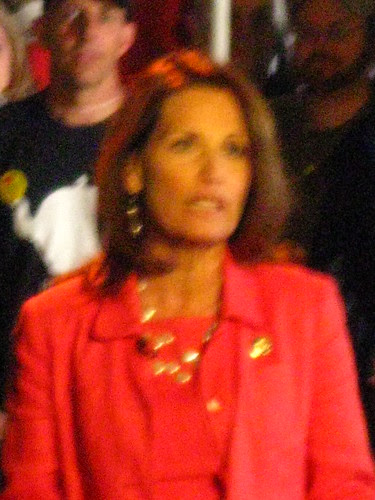 ...and the thought 'Presidential' came to mind. 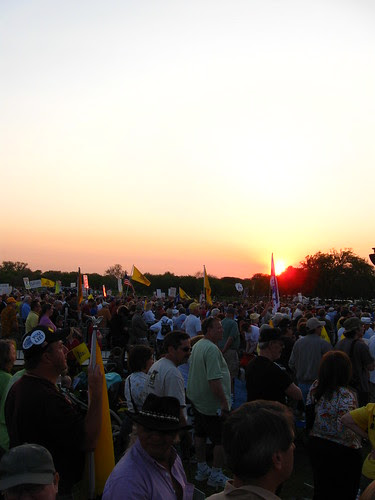 The sun went down. All too quickly it was over. 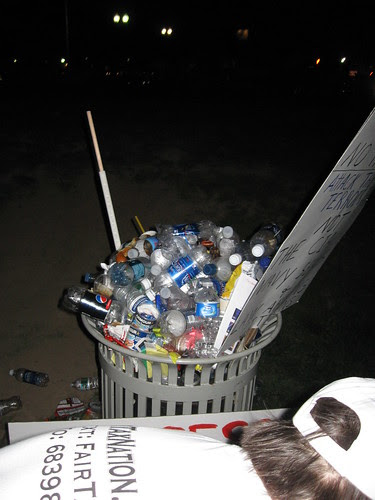