How to Repeal Obamacare in the Senate

Time to Get Serious about Killing this Bad Legislation 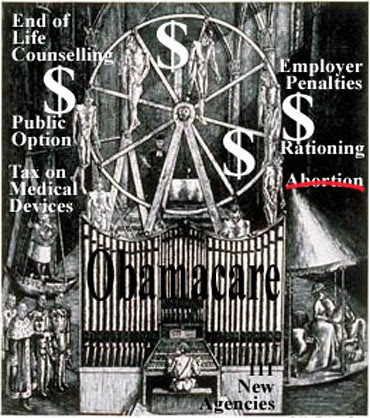 The bill 'we had to pass to see what's in it.' We've seen what is in it and it is time to get serious about repealing it.

"This week the House will pass a bill to repeal Obamacare. Congressional experts will argue that the Senate won’t pass a full repeal. They are correct to argue that full repeal will not be passed by both the House and Senate in the next few months, but they may be wrong that a full repeal bill will not pass in this Congress within the next two years. If Senators don’t take two procedural steps this week, they will make it virtually impossible to ever get a vote on the House-passed full repeal bill this Congress."

How to Repeal Obamacare in the Senate [click to read] by Brian Darling in The Foundry. ht/Redstate.

I believe there are reforms that can be achieved that would allow market solutions that work to stand and those that don't to be improved upon.

Tort reform should be part of the equation of making healthcare affordable as well. Malpractice insurance premiums are killing many medical practices. Reasonable awards for malpractice would cut costs for everyone. Also, higher deductables and MSA's [Medical Savings Accounts] would make people manage their own costs better. Here's an example, my children used to go to a pediatrician who simply billed "the maximum insurance will pay." -- his own words. I already had a high deductable and was paying out of pocket -- we found another doctor.

In short, I believe that a properly regulated system can find market efficiencies and provide better care than a government run system can. The monies that would be spent remaking the system would be better spent focusing on bringing in the uninsured and presently uninsurable.
Posted by Bob K. at 6:37 AM
Labels: Barack Obama, Harry Reid, Healthcare, Nancy Pelosi

Who writes: "I'm very curious as to why you and others are so against Obama's Health Care plan. I'd love to have a civil discussion with someone who has an an opposing viewpoint on it... someone who is willing to discuss this in a civil manner."

She goes on to say that she is very much for it because her spouse cannot obtain health insurance and depends on getting it as a benefit from being on her plan at work. She feels tied to the job for the benefits and would rather be creating art.

The problem is affordability. There is no resource such as The Freelancer's Guild available to her. This group in New York has successfully created an insurance group for artists. The rest of us are pretty much at the mercy of the individual policy market.

Which of course brings up a great point. If we simply repeal Obamacare and do nothing to address some fundamental problems in the system, we have simply shot ourself in the foot.

Doing nothing is not an option. Reforms are necessary. How best to make medicine more affordable and free us from job-based insurance should be a national priority. How best to do it should draw on the talents of our most creative thinkers.

It is certainly time to begin the dialogue we should have been having prior to passing large pieces of legislation.