It All Began at the Augusta Health Blood Bank...

...I was at Virginia Blood Services on the Trima machine, which collects platelets needed for the treatment of illness. One has a lot of time to think and converse during the procedure, and the Phlebotomists at Augusta do their best to make donation a great experience. Little did they know they were about to exceed their own expectations!

When I asked if they knew of an inexpensive getaway for a weekend with my wife, they started putting their heads together. We take care of my wife's elderly parents, so with a relief caregiver volunteering to come in, we didn't want to waste the weekend. Still, it has been tough for all of us associated with the building industry. There was no way we could afford a getaway.

"How much can you afford to spend?" she asked as the machine whirred a return. It was clear from my answer that financial resources were extremely thin. "Let me call my brother." she said.

Visions of a weekend in someone's hunting cabin came to mind. My wife would not find that all that romantic. Still, I needed ideas and was pretty desperate. "By the way, you don't need any artwork for your hotel?" I heard her ask. My ears perked up, I love the barter angle.

Then I heard her say my name in obvious answer to the question "Who is it?" "Oh, you know him!" she exclaimed.

Turns out her brother manages the Hampton Inn in Charlottesville where I worked in partnership with Russ Fisher to paint the lobby murals fifteen years ago! Now I have a complimentary suite! I can feel a twinkle in the eye of the Divine, who I suspect is quite a romantic. 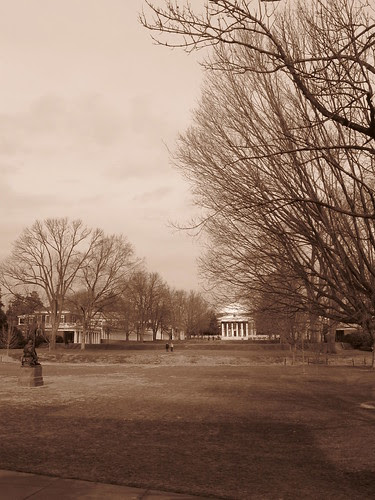 The Rotunda is a familiar image...

The inspiration for the Hampton Inn murals must rightfully be traced back to the photographs of Rufus W. Holsinger, who chronicled Charlottesville around the turn of the Century. Holsinger's images were reproduced on the walls of the University Cafeteria, which my Grandmother considered one of the few places to eat in Charlottesville. Monticello, the Rotunda and all of the familiar landmarks were there for the patrons to enjoy as they dined.

When Lisa Johnson of Plan Pro II first suggested the murals, the University Cafeteria was no more. It seemed like Charlottesville needed some sort of visual connection to its history and the lobby of her newest downtown hotel would be the ideal location.

...but what is lost is the vista Jefferson intended for it to overlook. Photos and rendering overlay by Bob Kirchman.

We checked in and walked around the lobby. Then a most amazing thing happened. Not only is the Divine a romantic, He is an encourager! The Desk manager discovered that I had designed and painted the murals and she began to introduce me to the staff. My wife and I felt like celebrities as we were introduced to a host of people from housekeeping and maintenance.

It was clear that these wonderful souls, who went to work by these murals every day, loved them. Perhaps they loved the unique identity they created for the hotel, perhaps they just loved the connection with their community, but the fact is that their lives were somehow enriched by a work G-d had allowed me to do. I am thankful for that. 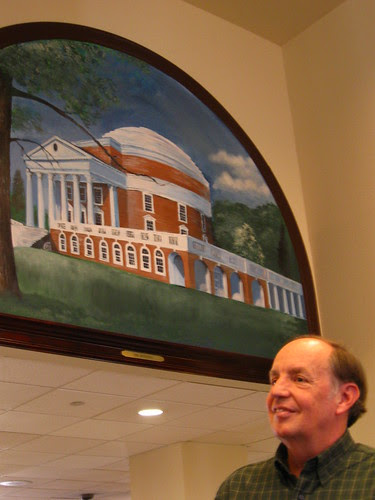 Here I am with the Rotunda painting. 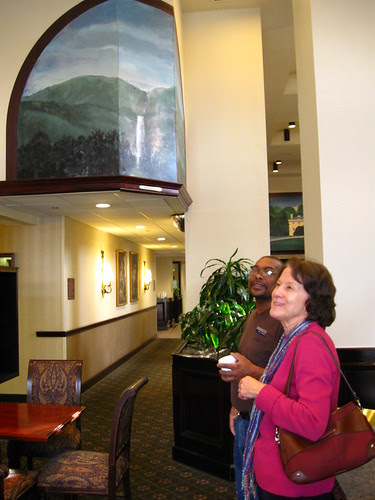 Crabtree falls is above us as we take a 'tour' of the murals with the hotel staff.

You can see all of the Hampton Inn Murals [click to view] here. 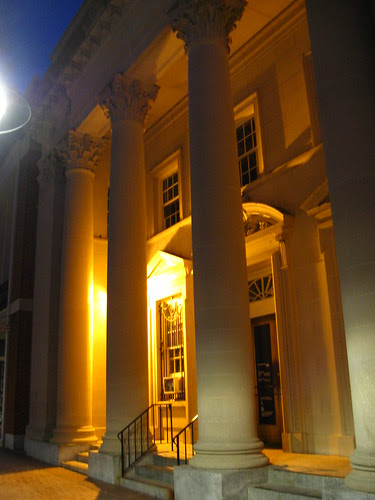 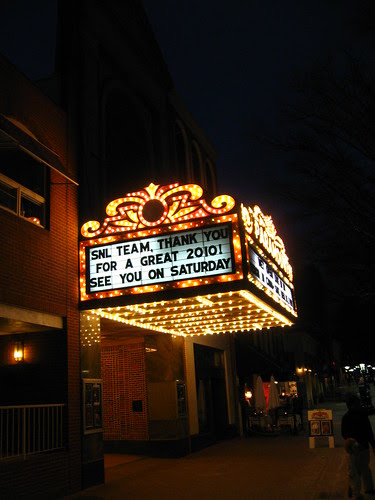 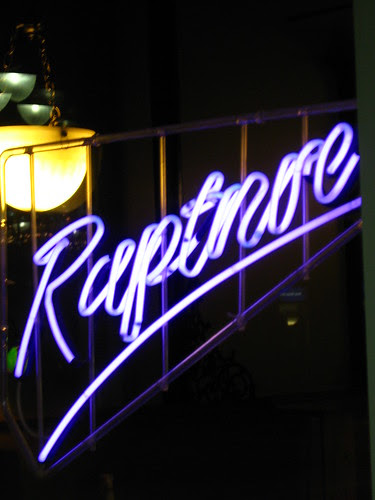 ...and a multitude of didning experiences. 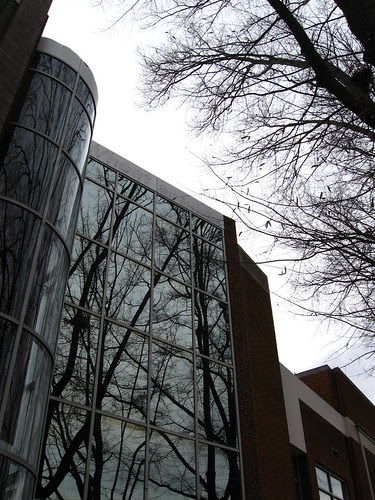 In the 1970's Charlottesville created the Mall from its Main Street... 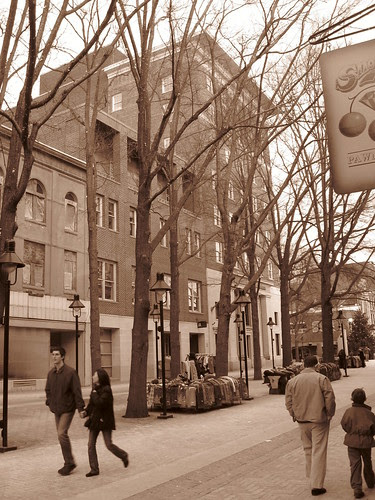 ...which initially created a decline as businesses left the street. Today a vibrant new culture of commerce has returned. The Mall is a popular place. 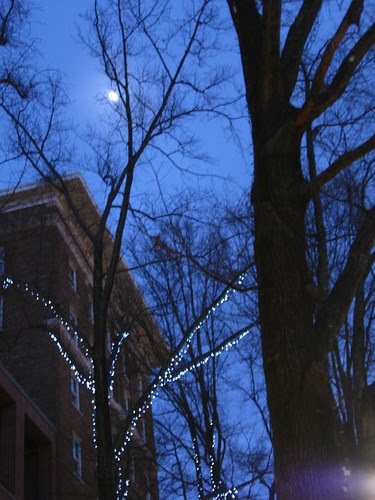 Moonlight over the Mall.

We enjoyed a pleasant walk along Charlottesville's Downtown Mall that evening. My wife took some books into a used book store and returned with some cash! She was obviously pleased with her side of the sale. Sunday morning we visited Trinity Presbyterian church for worship and were encouraged with a message on how G-d is close to us in our times of grief and suffering.

The text was the story of how Lazarus was raised from the dead. Our Lord knew he was going to raise Lazarus and yet he wept. He wept along with Lazarus' sisters Martha and Mary. He made their grief one with his own. Life can be hard and confusing, but G-d is not finished with the story. Still, He would comfort us and share our sorrows. It was a message I needed to hear and a further confirmation that this weekend was a gift from Heaven.

We walked around Jefferson's Academic Village and enjoyed his architecture. We drove out of town through Crozet and enjoyed the last light of evening at Mint Spring Park, grateful for the gift of unexpected blessings. 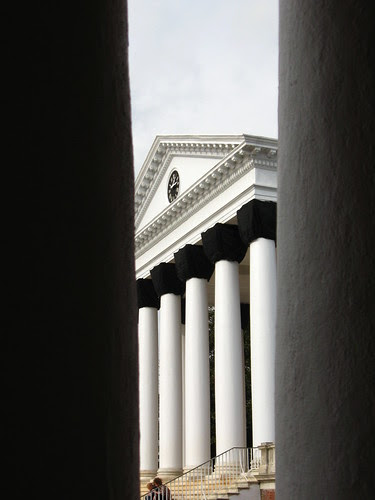 The columns of the Rotunda are draped in black in rememberance of Yeardley Love and Morgan Harrington. 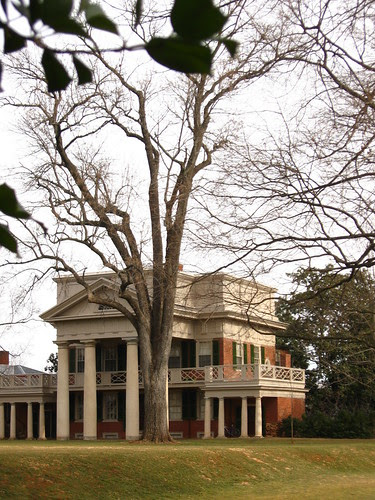 Pavilion X has been restored to the colors Jefferson originally used to suggest classical stone architecture. 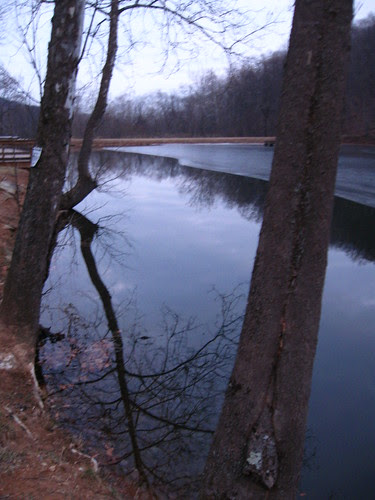 The Middle Lake at Mint Springs.
Posted by Bob K. at 6:09 AM
Labels: Murals, Thomas Jefferson