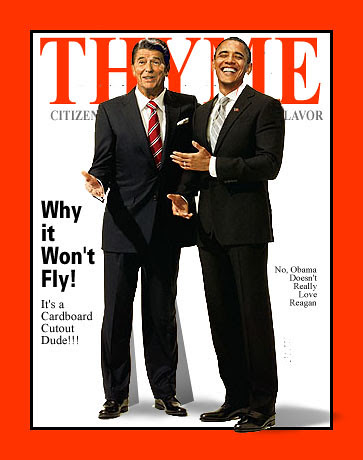 Obama and Reagan... a Shotgun Wedding?

The 'other' Weekly News Magazine [click to read] is featuring the cover: "Why Obama Loves Reagan." No, Obama loves Clinton, if anybody, here. After his own disasterous midterm election trouncing, Clinton veered right, building on his previous reputation as a moderate.

It worked. He embraced welfare reform and created the impression that he was his old Arkansas self again. He successfully fought off impeachment and won another term.

Obama campaigned as a moderate but one cannot find evidence that he ever intended to govern as one. If you actually read the healthcare bill and cap and trade legislation, you will see clear evidence that the man is a big statist. After calling for 'bipartisanship' in his campaign, he tersely reminded Eric Cantor: "I WON." He had no intention of working with Republicans unless they "rode in the back." Even with the help of publications like TIME, the President will have a hard time convincing voters thanks to the work of Hannity, Beck, Limbaugh, Lavin and Fox News. The President has pointed to all of these as enemies rather than answer the legitimate questions they have raised about his policies.

Here's What Obama Could Learn from Reagan [click to read]. The fact that Obama has not embraced these 'four pillars' of Reaganomics would indicate that this is all about style over substance.

More on the TIME Cover...

Michelle Malkin [click to read] offers this from Doug Powers.
No Sheeples Here [click to read]. "He's no Reagan!"
Here's the Real Reagan [click to watch] delivering HIS 1983 State of the Union Speech. ht/No Sheeples.
American Power [click to read] adds to what may well become the most 'shopped' TIME cover since 'Is Rush Limbaugh Good for America.'
Here's I Own the World [click to read] with the Obama 'self portrait.' ht/Mike.
Remember When America had a Real President? [click to read]. Mike asks, remembering a time in the not too distant past when the grown-ups were in charge.
The President's eHarmony Match [click to read]. We used eHarmony's TM system to find Mr. Obama's perfect match!

More on Reagan... in his Own Words

"Our friends in the other party will never forgive us for our success, and are doing everything in their power to rewrite history. Listening to the liberals, you'd think that the 1980s were the worst period since the Great Depression, filled with suffering and despair. I don't know about you, but I'm getting awfully tired of the whining voices from the White House these days. They're claiming there was a decade of greed and neglect, but you and I know better than that. We were there." -- Ronald Reagan, February 3, 1994.

"In closing, let me thank you, the American people, for giving me the great honor of allowing me to serve as your president. When the Lord calls me home, whenever that day may be, I will leave with the greatest love for this country of ours and eternal optimism for its future. I now begin the journey that will lead me into the sunset of my life. I know that for America there will always be a bright dawn ahead." -- Ronald Reagan, November 5, 1994
Posted by Bob K. at 4:54 AM
Labels: Barack Obama, Citizen Journalists, Thyme Magazine

Here's the Real Reagan [click to watch] delivering HIS 1983 State of the Union Speech. ht/No Sheeples.