This past week's TIME cover left a bad taste in a lot of people's mouths... that is if it didn't outright make them sick. The 'Obama Loves Reagan' theme was pretty lame. But here is the instructional moment:

When Obama was elected (or immaculated, as Rush says), TIME was quick to roll out the Photoshopped FDR cover. Here's the 'New New Deal,' they wrote.

Now, faced with a solid repudiation of his policies in the midterm elections, TIME wants to compare the 'Golfer' to the 'Gipper.' It is a stretch by anyone's imagination. Still, the point must be made that Obama almost always needs some comparison to make a statement about his place in history.

Ronald Reagan needed no such comparison. In the end, Reagan MADE history. He restored American exceptionalism and American confidence. He was always himself. When his advisors told him not to challenge the Soviets at the Berlin Wall, Reagan ignored them. He said "Mr. Gorbachev, tear down this wall" as his aides writhed. The Soviets saw a new fire in the American spirit. The wall is gone.

Reagan began Ameriica's journey back down the hard road to greatness, but he never waivered from his core beliefs. He handed his successors a revived economy and a nation respected. Few men can rightfully claim such achievements. 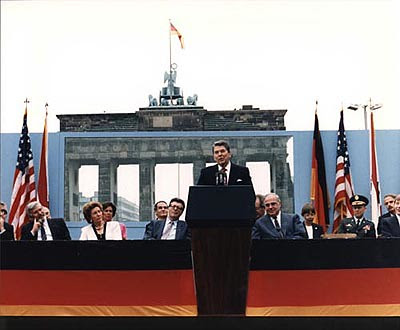 "We welcome change and openness; for we believe that freedom and security go together, that the advance of human liberty can only strengthen the cause of world peace. There is one sign the Soviets can make that would be unmistakable, that would advance dramatically the cause of freedom and peace. General Secretary Gorbachev, if you seek peace, if you seek prosperity for the Soviet Union and eastern Europe,if you seek liberalization, come here to this gate. Mr. Gorbachev, open this gate. Mr. Gorbachev, tear down this wall" -- President Ronald Reagan

“The wall that had imprisoned half a city, half a country, half a continent, half a world for nearly a third of a century was swept away by the greatest force of all: the unbreakable spirit of men and women who dared to dream” -- Gordon Brown

"I, in my own mind, have always thought of America as a place in the divine scheme of things that was set aside as a promised land. It was set here and the price of admission was very simple: the means of selection was very simple as to how this land should be populated. Any place in the world and any person from those places; any person with the courage, with the desire to tear up their roots, to strive for freedom, to attempt and dare to live in a strange and foreign place, to travel halfway across the world was welcome here." -- Ronald Reagan, June 1952

"If all of this seems like a great deal of trouble, think what's at stake. We are faced with the most evil enemy mankind has known in his long climb from the swamp to the stars. There can be no security anywhere in the free world if there is no fiscal and economic stability within the United States. Those who ask us to trade our freedom for the soup kitchen of the welfare state are architects of a policy of accommodation." -- Ronald Reagan, October 27, 1964

"You and I have a rendezvous with destiny. We will preserve for our children this, the last best hope of man on earth, or we will sentence them to take the first step into a thousand years of darkness. If we fail, at least let our children and our children's children say of us we justified our brief moment here. We did all that could be done." -- Ronald Reagan, October 27, 1964

"The poet called Miss Liberty's torch 'the lamp beside the golden door.' Well, that was the entrance to America, and it still is. And now you really know why we're here tonight. The glistening hope of that lamp is still ours. Every promise, every opportunity, is still golden in this land. And through that golden door our children can walk into tomorrow with the knowledge that no one can be denied the promise that is America. Her heart is full; her torch is still golden, her future bright. She has arms big enough to comfort and strong enough to support, for the strength in her arms is the strength of her people. She will carry on in the '80s unafraid, unashamed, and unsurpassed. In this springtime of hope, some lights seem eternal; America's is." -- Ronald Reagan, August 23, 1984

"Government growing beyond our consent had become a lumbering giant, slamming shut the gates of opportunity, threatening to crush the very roots of our freedom. What brought America back? The American people brought us back -- with quiet courage and common sense; with undying faith that in this nation under God the future will be ours, for the future belongs to the free." -- Ronald Reagan, February 4, 1986

"I've spoken of the shining city all my political life…. And how stands the city on this winter night? … After 200 years, two centuries, she still stands strong and true to the granite ridge, and her glow has held no matter what storm. And she's still a beacon, still a magnet for all who must have freedom, for all the pilgrims from all the lost places who are hurtling through the darkness, toward home." -- Ronald Reagan, January 11, 1989 [1.]
Posted by Bob K. at 6:17 PM
Labels: Citizen Journalists, Milestone Monday, Ronald Reagan, Thyme Magazine

Thanks, Bob. Love this best, "Obama almost always needs some comparison to make a statement about his place in history." What a revelation!

Actually it is a pretty simple observation if you have to study the 'other' weekly news magazine each week in order to parody it.

Now Byron York's Observation [click to read] on how Ronald Reagan grows larger with each passing year... that is significant!