Spontaneous Delight as a Design Element

What the Neo-puritans of the Nanny-state are Missing


Here is a better way to encourage more people to use the stairs.

Behavior police take note. Here is a great example of a better way to get people out of their routines; Out-of-the box thinking! The idea was to encourage more people to use the stairs. You could have used the same old approach of trying to correct 'wrong' behavior -- or a fresh approach like these designers chose to.

At Staunton Alliance Church, we were confronted by a long institutional hallway that led to our childrens' outdoor playground. Tracy Daniels, our administrator, approached me one day with the idea of painting a mural to "brighten up the hallway." Her idea was that we create a missions theme along the walls. Thinking that a mural paintedby an architectural illustrator might be a bit boring, I partnered with Laney Riley, a very talented artist in our congregation.

Our theme soon grew into a depiction of Isaiah 60 and Revelation 21where the restored Earth and Heaven are one. Representatives of every Nation are brought into the presence of the Lord. It is the hope of every believer, according to scripture, but is often depicted as a white-on-white perpetual harp concert. I'd read some books by Randy Alcorn, who writes about Heaven and puts it in its true context: a world of delights more delightful than anything we in this world can imagine... and yet, our imaginings here, and our most delightful experiences are but an indication of the joy that awaits us.

Thanks to what I refer to as 'Laney Magic,' bright colors and faces reflecting 'sanctified mischef' are the norm. This isn't your Mother's nursery mural. The figures are life-sized. We start the sketches by finding real children's pictures. Often they are kids in rags. We turn them into 'princes and princesses' of the New Heaven and the New Earth. We leave a bit of mischef in their faces though so the kids can see themselves in that beautiful world. The Creator who made the otter and the hairy-nosed wombat certainly has a playful streak, and Imago Dei would suggest that our love of fun is divinely authored. 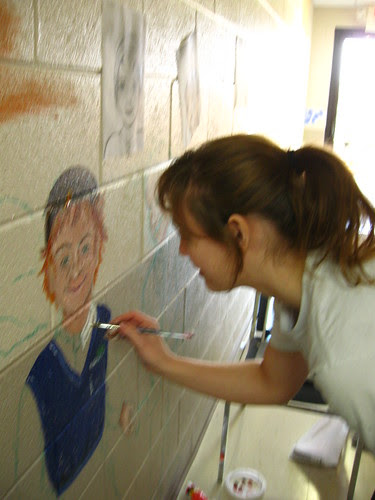 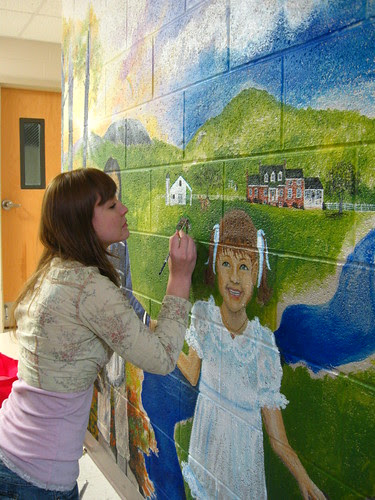 Here's 'Kristina's World.' The American girl, of Irish and Cherokee ancestry, stands in front of a farmhouse built in 1828. Bright colors and life-sized figures draw children into the painting.
Posted by Bob K. at 1:27 PM
Labels: Faith, Intelligent Design, Murals