Down That Wrong Road Again... 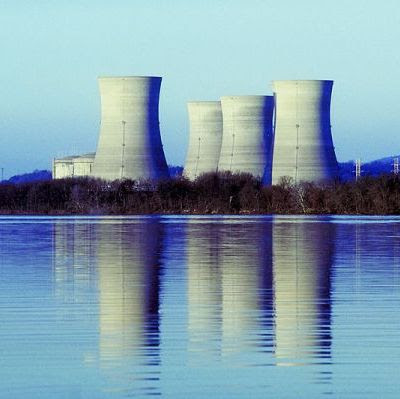 Back in the 1970s we were poised to build nuclear power plants enough to meet our energy needs. Unfortunately the accident at Three Mile Island was used by opponants of nuclear power to halt much of that planned capacity. Today we depend on fossil fuels and lay a haze across the Appalachians to meet our electric needs. It didn't have to be so.

In the wake of accidents, safety procedures were improved. Nuclear energy powers much of Europe and Japan without problems.

In Brand New Green [click to read], Peter W. Huber discusses how Environmentalist Stewart Brand has discovered that nuclear energy is really pretty environmentally friendly. Brand says: "The question I ask myself now is: “What took me so long? I could have looked into the realities of nuclear power many years earlier, if I weren’t so lazy.” When he got over his nuclear sloth, here’s what Brand learned. (Most of the words quoted here are Brand’s own, but some are Brand quoting others approvingly.) “Fear of radiation is a far more important health threat than radiation itself.” “Reactor safety is a problem already solved,” and the new reactors are even safer than the old. Waste isn’t a problem; we need the $10 billion Yucca mountain disposal site “about as much as we need a facility for imprisoning dangerous extraterrestrials.” Nuclear power isn’t just the cheapest practical carbon-free option around, but the cheapest, period, when not snarled up in green tape. Scientists “invariably poll high in support of nuclear.” The people so pragmatic that they actually keep the lights lit, he might have added, have polled that way for 40 years, on the strength of reams of data and analyses, as well as the operating experience of our nuclear navy and a wide range of commercial reactors scattered across the planet."

Today the President suspended offshore drilling in a move reminiscent of the nuclear policies of the past decades. The specter of disaster is being used to stifle the legitimate development of energy resources. Indeed, if deepwater wells are more dangerous, then why not allow drilling closer to shore... or from the shore itself. There are ways to exploit our domestic resources safely and it is a matter of national security.

We simply cannot cap off our own resources and put ourselves at the mercy of despots like Hugo Chavez.

We need a president who really is on top of energy policy, not one who says he is but fiddles while Rome burns.

Mr. President, let me help you. Here's what "On Top of It" looks like.

First, get your stinking foot off of BP's neck. It's really not there anyway. No one wants to lose eleven of their best people in a horrible explosion. We have a bad situation but BP is trying to solve the problem. Let's give them some support. Then we can analyze how we'll keep it from happening again.

Second, Governor Jindal asked for permission to build barriers to contain or mitigate the spill. Your correct response would have been: "Governor Jindal, I hope you're already getting your men in place. I'll clear the red tape for you... oh, Governor Jindal, Do you need any Seabee's from Gulfport? Do you need anything from us to do the job?" You know, if you had been a GOVERNOR instead of a 'Community Organizer,' you'd know how to do this.

Third, stop politicizing this disaster. America needs to safely extract energy from the ground. Wind farms just won't meet our needs. You wouldn't stop airplanes from flying because occasionally one crashes? You analyze failures and make things safer. Real leadership is stepping up to the plate and explaining just that.

Update: Augusta Conservative [click to read] brings us This from Reuters [click to read]. The drilling halt may cause more economic damage to the Gulf region than the spill.
Posted by Bob K. at 6:30 PM
Labels: Energy, Oil

Once again, the liberals refuse to learn from history.