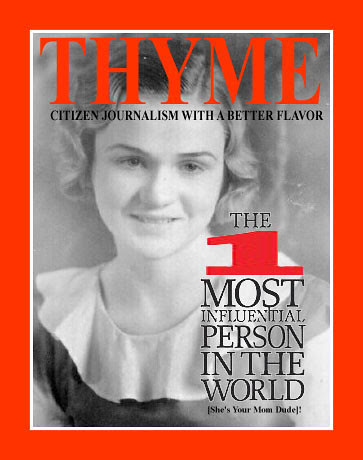 The 'other' weekly news magazine just published its list of 100 most influential people. We agree with them on Sarah Palin and Glenn Beck, and SWAC Girl offers This Write Up on Beck by Palin [click to read] that actually appears in the pages of TIME.

"Who'd have thought a history buff with a quirky sense of humor and a chalkboard could make for such riveting television? ... Self-taught, he's become America's professor of common sense, sharing earnestly sought knowledge with an audience hungry for truth. Glenn, 46, tackles topics other news shows would regard as arcane." -- Palin writes of Beck.

It get's better. Beck feels compelled to point out to Palin: TIME Folks Hate Us [click to read].

“Can we make sure that we're sitting at the same table?” Beck said. “I went last year. It is a nightmare!”

Palin replied: “Well, how did you face them? Because you know that there will be criticism of, oh, yeah, she condemns the mainstream media and yet she shows up at one of the functions . . . I don't mind making a couple of people uncomfortable in the room if I'm there.”

Well, Mr. Beck, Governor Palin, take note. TIME folks may hate you but THYME loves you! We'd love to be there with you and rest assured we'd make them uncomfortable too. Hey, we'd even tear out the endnotes of 'Arguing with Idiots' and study for a week just to keep it really interesting. I've done a little teaching and there's nothing so satisfying as sitting back and watching your students nail the stuff you taught them... we'd LOVE to treat you to some of that.

Before She Was a Governor She Was MOM!

Before she was a Vice-Presidential candidate she was a Mom. Those of us who had exceptional Mothers knew very well that that was a strong qualification for leadership.

My Mother worked in the engineering department of the Martin Company in Baltimore. During the war years she helped develop the seaplanes that were used in the Pacific. When we were kids Mom still pointed out cool looking airplanes. She raised five children -- all different. My two brothers are NASA engineers. My sisters are talented people who have had interesting careers as well.

Mom was there first. When she showed up at the Martin Company to crunch numbers for airplane designers she flatly refused to make coffee for the men. This truth is lived out in my own life -- I make my own coffee.

She must have been pretty good. When I was born the head of the department called her to beg her to come back. As the story goes, Mom took the call with me in her lap. No, she decided, she had a new project on her hands.

When we were homeschooling my daughter she expressed the sentiment that she wished she'd done that with us. People just didn't do that in the 1950's though. The 'experts' knocked you out to deliver the kid, sent the Dad home and then insisted that educators were better equipped to prepare little minds for the future.

The problem is that Mom had already taught me the complex English language and actually set me up with her old Underwood typwriter. She said I wrote little stories... sort of like primitive blogging.

I drew pictures too. I was pretty handy with a #2 pencil on the back of old medical forms provided by my Cardiologist Aunt. I remember fun summer afternoons when Mom put out the construction paper on the picnic table out back. We had a great time building little paper houses and assembling little villages.

Mom loved to teach complex concepts with illustrations. Once after we'd all had pie for dessert, she took the remaining piece and kept cutting it in half to show that [theoretically] it would be possible to continue to divide the remaining half in half again... forever!

What an honor it was to be her apprentice!
Posted by Bob K. at 9:57 AM
Labels: Citizen Journalists, Glenn Beck, Milestone Monday, Sarah Palin, Thyme Magazine

What a wonderful mom! Sounds like your whole family is very talented.