The Year of Jubilee 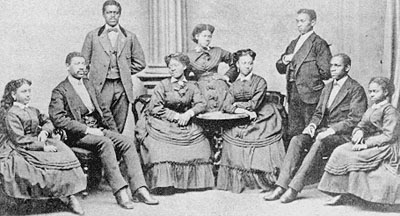 Early photograph of the Jubilee Singers.

Out of the ashes of the American Civil War there arose institutions such as Fisk University in Nashville Tennessee. The outcome of the war had freed the slaves but many people realized that education was key in truely liberating these citizens. Fisk University's mission was to provide opportunities in higher education to African Americans, many of whom were newly freed slaves. As a young institution without established alumni, the school faced a continual challenge in funding its programs. Five years into its mission the school was facing bankruptcy and the possibility of closing her doors.

George L. White, the school's treasurer and music director, organized a nine member chorus of students with the hope that they might increase awareness of the school and its mission, On October 6, 1871 the initial group, two quartets and a pianist, made their first United States tour.

They began their concert tour in Cincinnati Ohio. When the students heard of the Great Chicago Fire that same month they promptly sent the entire profits from their Cincinnati concert offering. “We had thirty dollars and sent every penny to Chicago and didn’t have anything for ourselves” according to soprano Maggie Porter, who also remembered the gratitude expressed by the people of Chicago.

From Cincinnati the group travelled on to Columbus, where they suffered from a lack of funds enough to provide for even basic accomodations. The Columbus newspapers proved to be less than kind in their coverage and audiences did not take them seriously. The singers were serious musicians and as such did not fit many peoples' stereotype of the 'minstrel' genre.

Tired and discouraged, the group and their pastor, Henry Bennett, prayed about whether or not to continue the tour. The offerings were poor and the audiences sometimes hostile. Surely it was time to pack up and go home.

White, a former missionary, went off by himself to pray about the matter and then reached the conclusion that a new name for the group was in order. The next morning he told the students that henceforth they would be known as "The Jubilee Singers," a reference to Leviticus 25 in the Bible, the passage that talks of the Year of Jubilee, the time in the Kingdom when all debts were to be forgiven and all slaves were to be set free. Indeed, the new name resonated with the experience of many of the students, who had been born in slavery.

They toured on! The first United States tour eventually raised $40,000 for Fisk University. In 1872 they were invided to perform for President Ulysses S. Grant at the White House. In 1873 they toured Europe and sang for Queen Victoria in England. A second European tour raised $150,000 for the university and allowed the construction of the school's first permenant building, aptly named Jubilee Hall.

In 1878 the original group was disbanded. Ella Sheppard, one of the original students in the group says: “our strength was failing under the ill treatment at hotels, on railroads, poorly attended concerts, and ridicule.” Maggie Porter says of this: “There were many times,when we didn’t have place to sleep or anything to eat. Mr. White went out and brought us some sandwiches and tried to find some place to put us up.” Other times while the singers would wait in the railway station White “and some other man of the troupe waded through sleet or snow or rain from hotel to hotel seeking shelter for us.”

A new choir was organized by White in 1879 The group continues to this day. In addition to the usual choral numbers the Jubilee Singers introduced many of the old spirituals they had grown up with to an international audience. [1.] 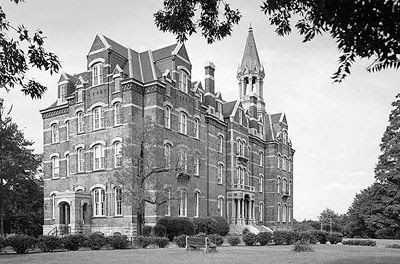