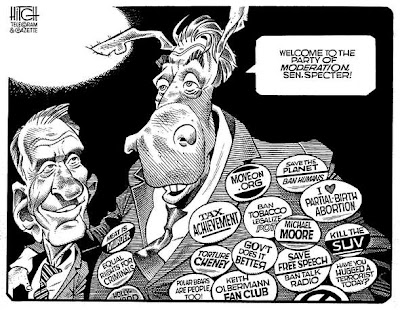 Obviously some people are feeling underrepresented in Washington.
***
Arlen Spectacle [click to read]. That's what The Great One calls him. SWAC Girl takes us on a journey down memory lane. The moral of the story: Changing party affiliation only works if it brings you CLOSER to the people you represent. They are the ones who got you elected. They went door-to-door, manned phone banks and sent in their hard earned cash to put you where you are. They are the ones who are more comitted to America's core values than our media would lead you to believe.
***
How many 'experts' were out there telling everyone that the Era of Reagan was over? In order to win elections you had to distance yourself from those nasty old Neocons. The people, according to them, WANTED government to step in and take care of things. Meanwhile in the grassroots, the people were waking up to where expanded government was taking them. The Democrats were not sounding so reasonable anymore now that they controlled everything.
***
They didn't love Arlen all that much in the end either. He was useful as a vote for their agenda but he wasn't THEIR man. It is no big surprise that he lost a primary. Benedict Arnold probably felt the same... estranged from those he spurned and those he tried to embrace.
***
Specter stepped away from the people just as they became engaged in the process. That turned out to be his fatal mistake.
***
The Lesson [click to read] in all this is a story of betrayal and its consequenses.
Posted by Bob K. at 7:17 AM
Labels: Arlen Specter