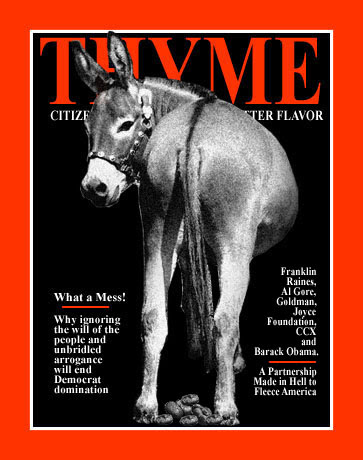 There is just too much going on these days! We thought it was time to remember TIME's past, specifically the October 16, 2006 Issue [click to view]. The issue features the hindquarters of an elephant and the subtitle "What a Mess." But the mess they gleefully prophesized would end the Conservative surge was NOTHING compared to the present mess. Americans by the thousands have gone to Washington to make our voices heard... and still our pleas fall on deaf ears! WHAT A MESS!

A Partnership Made in Hell to Fleece America [click to read]. Once again that 'Mad Man,' Glenn Beck is ahead of the curve with a report on 'the usual suspects.'

Franklin Raines, bundler of worthless mortgages and major force behind the destruction of the construction industry makes his appearance as the purchaser of the technology to measure and manage carbon [using Fannie Mae money -- our tax dollars]. The patent was awarded the day after Barack Obama and Democrats won the election. Coincidence?

"Even if he loses the primary, staying in the state legislature, I will keep reporting on Anthony Williams because he will surely continue to be heard from on saving students from dead-end schools. He is a founder of the Hardy Williams Academy Charter School in his state. Like another historic Pennsylvanian, Benjamin Franklin, this model citizen practices what he preaches."

Experience the State of Freedom -- Arizona

Once again the liberals are boycotting a state when someone there does the right thing. Another great travel opportunity folks! Enjoy a drive to the Grand Canyon without those nasty Obama bumper stickers!
Posted by Bob K. at 5:17 PM
Labels: Citizen Journalists, Milestone Monday, Thyme Magazine

You've outdone yourself on this one! I like the addition of the manure, in particular.

I actually had to restrain myself. If I'd put in as much manure as I wanted even Hercules couldn't clean it up.