Time to Ask the Question: 'Why NOT?' 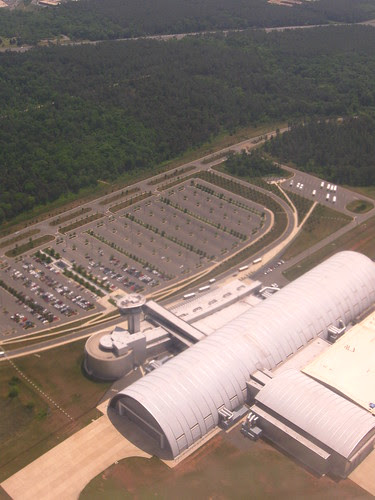 A bird's-eye view of the Air and Space Museum at Dulles Airport.

It's Graduation Time [click to read] in the SWAC Blogosphere. Inevitably we look to the future and invoke history, hoping to see the generations that follow us change the world for the better. Sadly, we're seeing a systematic attack by cash-hungry government on the engines of creativity that normally drive human progress.

Nowhere is this more true than in California, where increased taxation and regulation strangles all but the best and brightest. Still, Silicon Valley is home to a surprising number of start-ups. Human ingenuity always finds a way to excell even in the direst of times. Sadly, the growing burden narrows the number of winners. Here is where Governor McDonnell's Pro-Market Virginia needs to be promoted with increased vigor. Virginia could well become known as the state that refused to let opportunity die.

In The Silicon Lining [click to read] Guy Sorman talks about the continuing wealth creation of California's high tech firms, even in the face of government hobbling. Still, the victor's circle is getting smaller. At some point taxation and regulation... and government attempts to pick winners... will kill the golden goose. Here's where I believe Virginia can shine.

Governor McDonnell can continue to promote policies that allow many start-ups that would be impossible in California to gain traction in the Old Dominion. We've already become competitive with wine, why NOT technology too. Northrup-Grumman just placed their future growth here. Why can't the trend continue?

We have world-class universities, the Langly NASA facility, and an existing tech industry in Blacksburg and Herndon already. We have empty manufacturing plants in the valley that could be part of this creative renaissance. We have a good workforce that would allow some industries to localize their operations for both economic and strategic advantage.

I have a feeling we're in a unique position to make a reality of the next 'great idea!'

What is the next great idea? I don't know. I do know that Cyrus McCormick lived here and revolutionized agriculture with his mechanical reaper. He built it in the mill shop in Raphine. Wilbur and Orville Wright were two bicycle mechanics in Dayton Ohio. People probably shook their heads at heavier-tha-air flight until that day at Kitty Hawk. This weekend I stepped on two magnificent airplanes that the Wrights could not have imagined and rode to and from Chicago in comfort.

Tomorrow's innovations will no doubt be in the technologies that power our mobility. Our job today is to clear the right of way -- in the area of regulatory and revenue collection -- to allow those pioneers of the future to take wing.

SWAC Girl Continues the Discussion [click to read].
Posted by Bob K. at 8:18 AM
Labels: Wilbur and Orville Wright