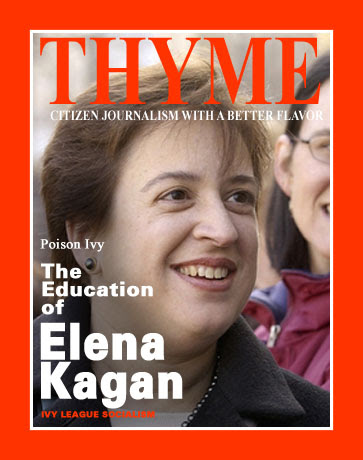 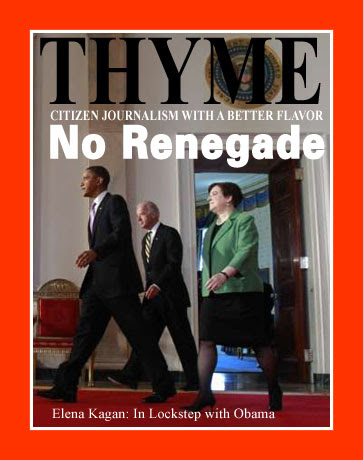 If the MSM treated Elena Kagan like they do Sarah Palin...

In her thesis she bemoaned the decline of Socialism. Need I really say any more.

On Free Speech [click to read] her arguments for banning political pamphlets are troubling.

We've already heard about her position on military recruiters on campus. THYME will once again step in where the MSM fears to tread.

Kagan Flunks Her Own Test

This just in. James R Copland [click to read] in City Journal reports:

"Elena Kagan, President Obama’s nominee to succeed John Paul Stevens on the Supreme Court, published some thoughts on the judicial confirmation process in 1995. Reviewing Stephen Carter’s book The Confirmation Mess in The University of Chicago Law Review, Kagan asserted that prospective jurists should have demonstrated a talent for judging: “It is an embarrassment that the President and Senate do not always insist, as a threshold requirement, that a nominee’s previous accomplishments evidence an ability not merely to handle but to master the ‘craft’ aspects of being a judge.” While not in my view an “embarrassment,” Obama’s decision to nominate Kagan to the nation’s highest bench flunks her own test. If confirmed, Kagan would become the first justice in 38 years to join the Supreme Court without judicial experience."

As articles editor for the Harvard Law Review in 1985 Kagan helped shepherd into print a racially noxious story by a radical law professor and architect of Critical Race Studies, which is essentially "blame whitey" in legal vernacular.