One of my favorite movies is "The Longest Day." My favorite scene in the movie is where General Theodore Roosevelt Jr., Son of the 'Rough Rider' President, pleads to be allowed to accompany his men in the invasion. If you love heroes, the scene will bring you to tears. Finally Roosevelt hears his commander say "permission reluctantly granted. Oh, by the way, how's your arthritis?" "Hasn't Bothered me in months," replies Roosevelt. As he leaves, you see him retrieve the cane he has hidden in some pipes as he heads off down the ship's passageway.

The true story of General Roosevelt is one all of us should know. He repeatedly led groups of men off the beach and achieved an impressively low casualty rate in the beginning of the invasion. He had trained these men and wanted to be with them when they faced the hard test. 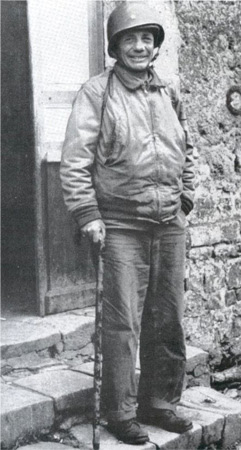 He was the only general to come ashore in the first wave of the invasion, leading the men out of his landing craft. No doubt his leadership under fire saved many lives.

After battling their way ashore, the troops discover that they have drifted a mile from where they should have landed. It was then that General Roosevelt personally scouted their situation and uttered these famous words: "We'll start the war from right here!"

Those were the words of Omar Bradley when asked to name the single most heroic action he had ever seen in combat. Major General "Tubby" Barton had reluctantly assented to this plea from Roosevelt:

"The force and skill with which the first elements hit the beach and proceed may determine the ultimate success of the operation... With troops engaged for the first time, the behavior pattern of all is apt to be set by those first engaments. [It is] considered that accurate information of the existing situation should be available for each succeeding element as it lands. You should have when you get to shore an overall picture in which you can place confidence. I believe I can contribute materially on all of the above by going in with the assault companies. Furthermore I personally know both officers and men of these advance units and believe that it will steady them to know that I am with them."

Barton thought he would never see Roosevelt in this life again when he cut those fateful orders. When Barton later came ashore and met up with Roosevelt, he had this to say: "while I was mentally framing [orders], Ted Roosevelt came up. He had landed with the first wave, had put my troops across the beach, and had a perfect picture (just as Roosevelt had earlier promised if allowed to go ashore with the first wave) of the entire situation. I loved Ted. When I finally agreed to his landing with the first wave, I felt sure he would be killed. When I had bade him goodbye, I never expected to see him alive. You can imagine then the emotion with which I greeted him when he came out to meet me [near La Grande Dune]. He was bursting with information."

A month after the invasion, Ted Roosevelt died of a heart condition which would have disqualified him from leading in the first wave. He was buried in France alongside his brother Quenton who had died in World War I. His Medal of Honor citation reads as follows:

"For gallantry and intrepidity at the risk of his life above and beyond the call of duty on 6 June 1944, in France. After 2 verbal requests to accompany the leading assault elements in the Normandy invasion had been denied, Brig. Gen. Roosevelt's written request for this mission was approved and he landed with the first wave of the forces assaulting the enemy-held beaches. He repeatedly led groups from the beach, over the seawall and established them inland. His valor, courage, and presence in the very front of the attack and his complete unconcern at being under heavy fire inspired the troops to heights of enthusiasm and self-sacrifice. Although the enemy had the beach under constant direct fire, Brig. Gen. Roosevelt moved from one locality to another, rallying men around him, directed and personally led them against the enemy. Under his seasoned, precise, calm, and unfaltering leadership, assault troops reduced beach strong points and rapidly moved inland with minimum casualties. He thus contributed substantially to the successful establishment of the beachhead in France."

It is worth noting that Roosevelt, while a very effective officer, was not liked by everyone he met. Serving in the North Africa Campaign in 1942 under Major General Terry Allen he drew the ire of George S. Patton. Both Allen and Roosevelt went against Patton's spit-and-polish mentality and were seldom seen in dress uniform. Roosevelt was too much of a "hands on" type of guy to strut around avoiding the hard stuff. Patton relieved both Allen and Roosevelt of their commands. Roosevelt went on to fight in Sicily and Italy. He became chief liaison officer to the French Army in Italy for General Dwight D. Eisenhower.

Great men have often struggled in the process of becoming the heroes we remember and that is worth remembering along with their mighty deeds.
Posted by Bob K. at 12:53 PM
Labels: Theodore Roosevelt Jr., World War II