Jihad in the White House

Is Mubarack Hussein Obama a Muslim? 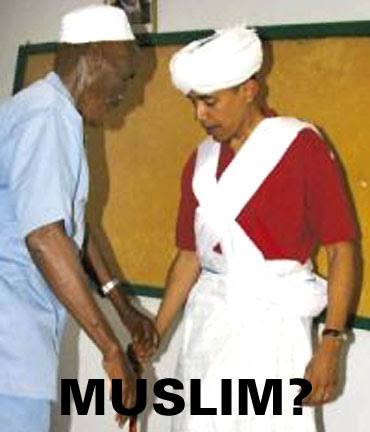 "Give me a child until the age of seven and I will give you the man." -- Jesuit Saying.

Maybe it was the creepy extended bow to the Saudi King, or the way he seems all to willing to throw Netanyahu under the bus but when I came across an article by Victor Mordecai asking the question "Is Obama a Muslim?" I took notice.

His Kenyan Father and his Stepfathers were clearly Muslims and his early education was in that tradition. To observant Muslims in the Middle East that qualifies him. Still, to ask the question invites the label "lunatic fringe" for reasons that have largely been manufactured out of Political Correctness.

Saudi Radio in the months before Obama's election stated: "We will have a Muslim in the White House."

Lybia's Quaddafi said of Obama after his election: "Our man in the White house."

One station stated that Obama would first deal with the Shi'ite of Iran who "threaten all Sunni Muslims" then deal with the "fanatic" new government of Israel under Netanyahu.

Conventional wisdom has it that Obama's education in Muslim schools until age 11 are in the past, just as his association with Jeremiah Wright. Unfortunately Wright's church, with its James Cone inspired Black Liberation Theology is more Marxist in its core philosophy and Christian in the use of language and symolism. If Barack Obama is a Christian there is not a lot of evidence to convict him of it.

Fringe thoughts? Perhaps, but when you have a President who is uncomfortable with 'Victory' in Afganistan [although he seeks it outright for his domestic policies], drags his feet on supporting his troops and bows at the waist to the Saudi King, is the question really all that unreasonable?

Update: From Obama to Osama with Love [click to read] perspective from 'Gates of Vienna.'
Posted by Bob K. at 6:52 AM
Labels: Barack Obama, Jeremiah Wright, Jihad